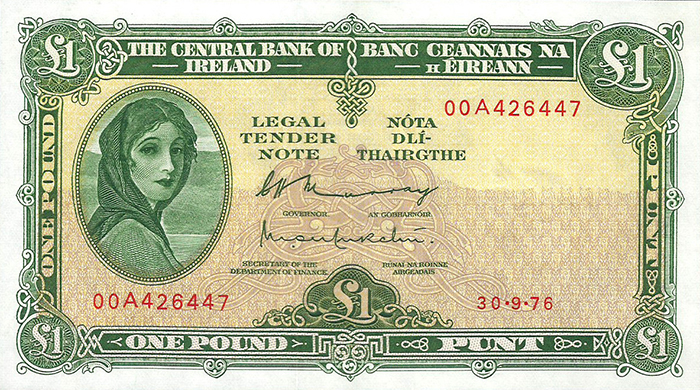 Final date of the Lady Lavery type as a replacement, with “00A” prefix.

The Central Bank of Ireland introduced its own banknotes in 1928, the Lady Lavery banknotes (“Series A”), which we previously discussed in this article. This series would not be replaced with a new design until the late 1970s (“Series B”), which in turn was replaced with a final issue in the early 1990s that continued to be in use until the Irish pound ceased to exist (“Series C”). Replacement banknotes exist for all series, although the first identifiable Lady Lavery replacements were not issued until the tail end of the series, in 1974. Prior to this date the printers used regular serial-numbered notes to replace those damaged in the production process. Replacements of the Lady Lavery series are very scarce to rare, and only exist for four denominations: £1, £5, £10 and £20. The 10/- shilling denomination had been discontinued by the end of the 1960s, and no special replacements were printed for the £50 or £100 notes.

The next series introduced more regularly printed replacements that continued with the same format until the end of Irish banknotes in 2002. Three identical prefix letters can identify these replacement notes, but caution has to be exercised, as not all notes with identical prefix letters are considered replacement notes. Also, while there is some regularity, prefix letters were not used in order. For example, for the £20 denomination of Series C, replacements with BBB prefix were printed first, followed by FFF, with CCC printed after those. As dates on the notes changed frequently (there can be 10+ dates for each of the replacement prefixes), this is not as confusing as it could be, but it’s obvious that sometimes the Central Bank of Ireland followed an illogical order when numbering replacement notes. 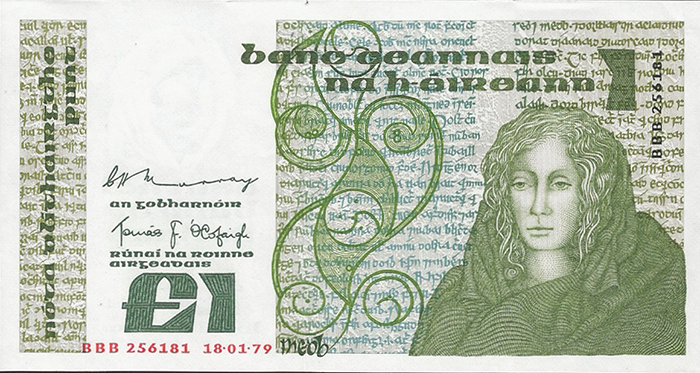 “BBB” replacement of Series B £1. This note was the last £1 issued in Ireland and as a replacement carries about a 10x premium over a regular note. 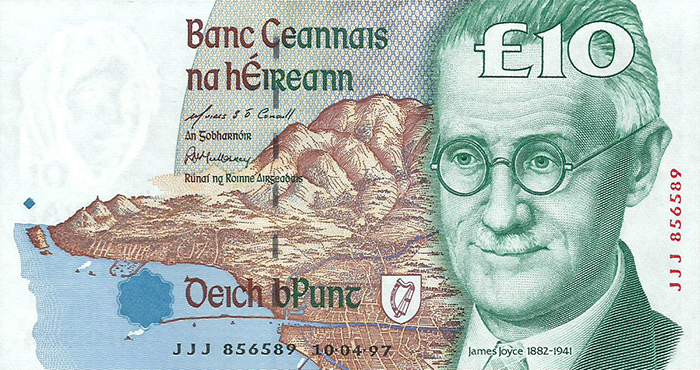 Series C £10 Replacement. Final date issued as a replacement with an estimated print run of 18,000 notes. 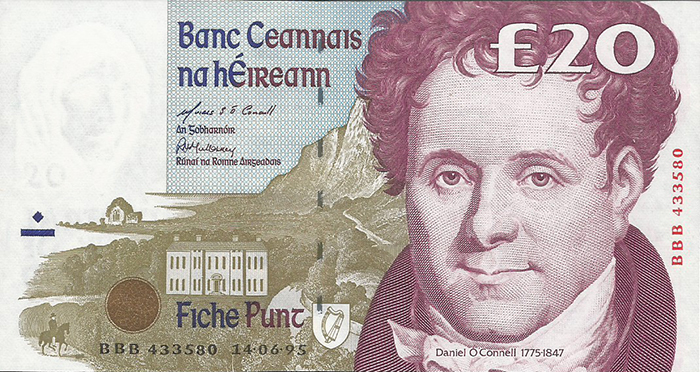 “BBB” was used as the replacement prefix throughout most of the issuance of Series C £20 notes, continuing the numbering for each date.

Replacements of both the Series B as well as the Series C are very scarce in Uncirculated condition. They were randomly inserted into packs, and with many different dates printed, assembling a complete collection is a very difficult task. Some dates had a minuscule number of replacements printed, and the rarity of these relatively modern banknotes should not be underestimated. Consider this: for collectors of Federal Reserve Notes from the United States, a replacement print run of 640,000 notes is considered “low.” One of the rarest modern Irish replacement notes is the £20 dated 14.01.1994 with BBB prefix, which had an estimated print run of 1,121 notes. For many other dates in the series there were less than 50,000 replacement notes printed when total production was in the millions. Because of this it must have been a very rare occurrence for someone to notice one of these replacements in a fresh pack from the bank and put it aside for later collectors to enjoy.

Many modern banknotes from countries that have switched to the euro are very popular with collectors, and the notes of the Irish Pound are no exception. Series C banknotes are very popular with collectors both inside and outside of Ireland, and many collectors try to acquire one of each denomination. The £100 banknote, for example, was rarely used at the time it was issued thanks to its high face value, but today this is a banknote approaching $800 in Gem Uncirculated condition. When it comes as a replacement (a single date with KKK prefix is a replacement of this issue), the price goes up to over $1,000, and the premium for replacements of lower denominations is generally larger.

The good news for collectors is that many dealers do not realize the scarcity of replacement notes of Series B and C, making it possible to “cherrypick” short printed dates from dealers who failed to do their homework. While they might charge a premium for replacements, many times the premium is rather small. Fact is, however, that because these notes are so scarce in the first place finding any modern Irish replacement note is quite a feat. When you do, however, you will have located a little known gem in modern world banknotes that has very strong potential for growth in value as more people discover the scarcity of these iconic banknotes.