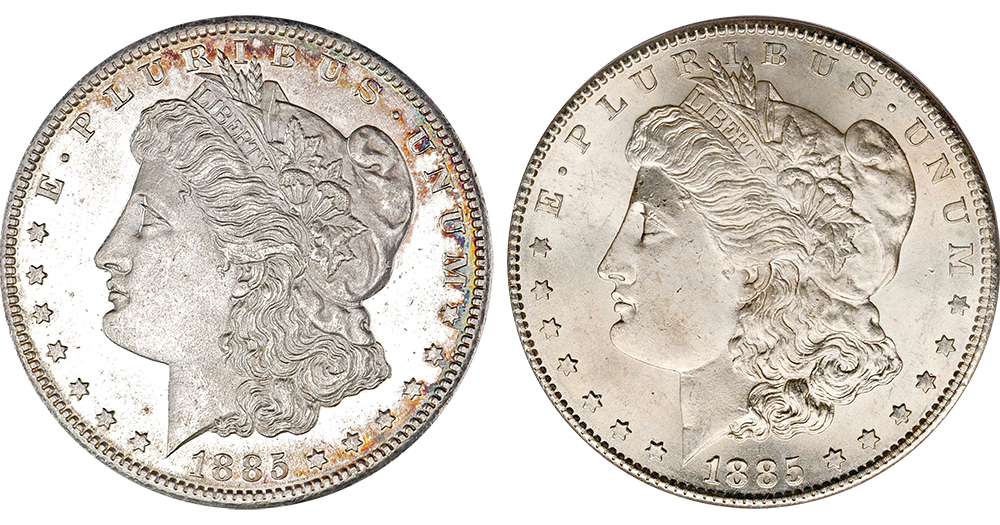 One of these 1885-S Morgan dollars is real; the other is a fake. Can you tell which is which? (The answer is in the story below.)

The production and ownership of copies or replicas of U.S. coinage, regardless of their quality or metal content, is not prohibited by law. The Hobby Protection Act of 1973 requires a reproduction to be clearly marked on one side with the word COPY, incused (not in raised lettering). There are many reputable manufacturers of replica coins in the United States and around the world; examples of their products are frequently seen advertised on television, in print media, and even in numismatic publications.

Unfortunately, there are modern counterfeit coins in today’s marketplace that do not abide by the Hobby Protection Act. Many of these fakes are crude, underweight, and obviously not genuine. Others, however, are deceptive enough to fool even a longtime student of numismatics.

An experienced coin collector who finds, for example, a raw (uncertified) 1893-S Morgan dollar, in a circulated grade such as Extremely Fine, will examine the coin—feeling the heft of its silver, observing the bag marks from 19th-century travel from mint to bank, seeing the evidence of its circulation through the Old West, inspecting the tiny devices that contain a century and more of dirt and grime. After this visual inspection, the collector might perform some basic analyses, finding that the coin weighs the proper 26.7 grams, measures exactly 38.1 mm in diameter, and has the specific gravity (10.34) of a .900 fine silver dollar. Given these reassurances, it might be difficult to convince even the experienced collector that this “coin” is actually a level D-4 counterfeit, manufactured two weeks ago in China.

There are Chinese counterfeiters who admit they produce 100,000 fake coins per month—exceeding the volume of legitimate coins struck by many small nations. These counterfeits are in compliance with Chinese law as long as they are dated before 1949, the year the People’s Republic of China was founded. Unlike the United States, China does not require replicas or copies to be marked as such.

On December 19, 2014, President Barack Obama signed into law the Collectible Coin Protection Act, which strengthens the 1973 Hobby Protection Act by, among other things, allowing faster response by law enforcers, making seizure easier, and expanding legal remedies available to those harmed by the sale of counterfeit coins. What follows is a discussion of, and a classification system for, replicas that are not in compliance with the Hobby Protection Act—those that have the greatest potential to deceive collectors.

Factors Affecting the Quality of a Counterfeit Coin

Several factors blend together to establish the quality of a counterfeit coin and thus its ability to defraud unsuspecting collectors or even expert numismatists.

The planchet is a blank metal disk with upset rims, intended to be struck by dies to produce a coin. Often the planchet is the most difficult item for a counterfeiter to obtain—at least with specifications accurate enough to create a convincing replica. To deceive a buyer, a counterfeit’s planchet must be of the proper diameter, thickness, weight, and metal composition. Since governmental mints maintain a high degree of planchet accuracy, the counterfeiter’s task can be challenging. (Currently, only about 1 planchet in 100 is accurate enough to create a level D-4 counterfeit.)

Three dies are necessary to produce a coin: the anvil die, the hammer die, and the collar die. The accuracy of this combination is crucial to high-quality counterfeit production.

Production of coinage dies has been problematic for centuries. High-quality steel is necessary to produce a working die. Early counterfeiters, after obtaining tool steel, would cut dies by hand; later, they would fabricate dies by spark erosion, impact methods, one-to-one transfer methods, and casting. Each of these techniques was fraught with problems. The counterfeiter’s solution came with the advent of desktop computers controlling metal-cutting lasers.

The equipment necessary to establish a counterfeit-coin production facility is readily available and affordable. Both new and used equipment is available through Internet sales and from major suppliers. Some modifications, performed by a master machinist, are required before production can commence. According to the U.S. Customs and Border Protection Agency, about 80% of all counterfeit goods seized at U.S. ports were created in China. The International Intellectual Property Alliance reports that China produces more counterfeits than all other countries combined. One of the major producers of modern Chinese counterfeit coins is Mr. L—, owner and operator of an established factory in Fujian Province. Mr. L—’s coin presses were at one time in operation at a U.S. mint, and in the early 1900s were sent to the mint in Shanghai, China. In the mid-1950s the presses and ancillary equipment, being obsolete for China’s modern coining needs, were sold off as scrap and ended up in the counterfeiters’ shops of Fujian. In short, Mr. L—’s counterfeit coins are struck on original U.S. Mint coin presses and at the identical strike pressures as the original coins.

Post-production artificial enhancement is designed to alter the “just-struck” appearance of the counterfeit, to deceive a potential buyer into believing the item is genuine. Many methods exist, and Chinese counterfeiters have become masters of this deceitful art. “Coins” can be produced with a cameo Proof appearance, or altered to a grade of About Good. This coin doctoring combines artistry, advanced chemistry, and mechanics to artificially create the appearance of years of circulation. Alterations and treatments include: 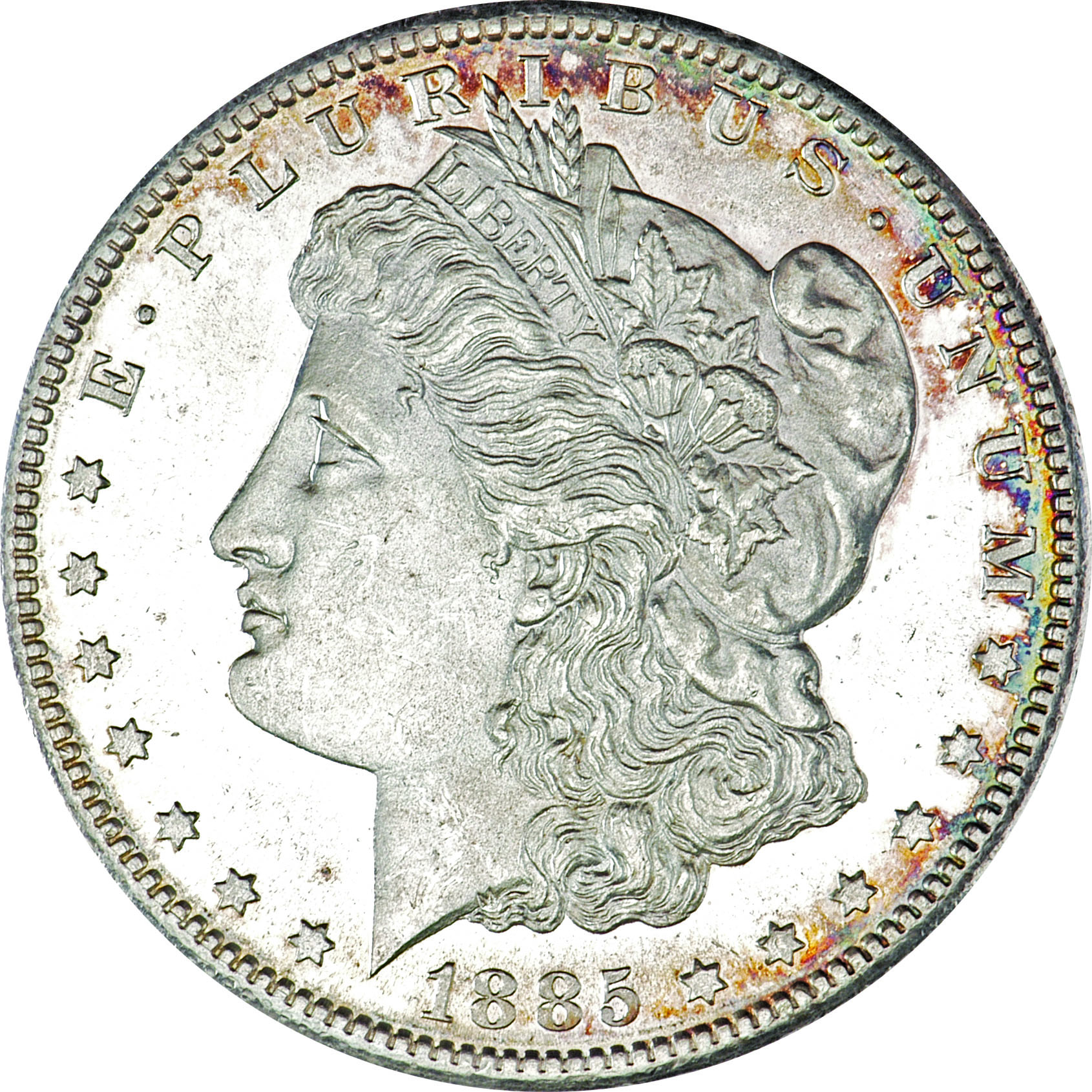 A good deal of post-strike doctoring went into this counterfeit Morgan dollar (above), which is in every respect an excellent copy of the real thing (below). Note the bag marks on the cheek, the hint of lighter-colored wear on the high points, the dings on the rim near the N in “UNUM,” and the discoloration and toning settled into the low points around the letters and stars. Still, if you’ve studied scores of real Morgan dollars, something seems unnatural about the surface coloration. Hover over the images to zoom in and compare. 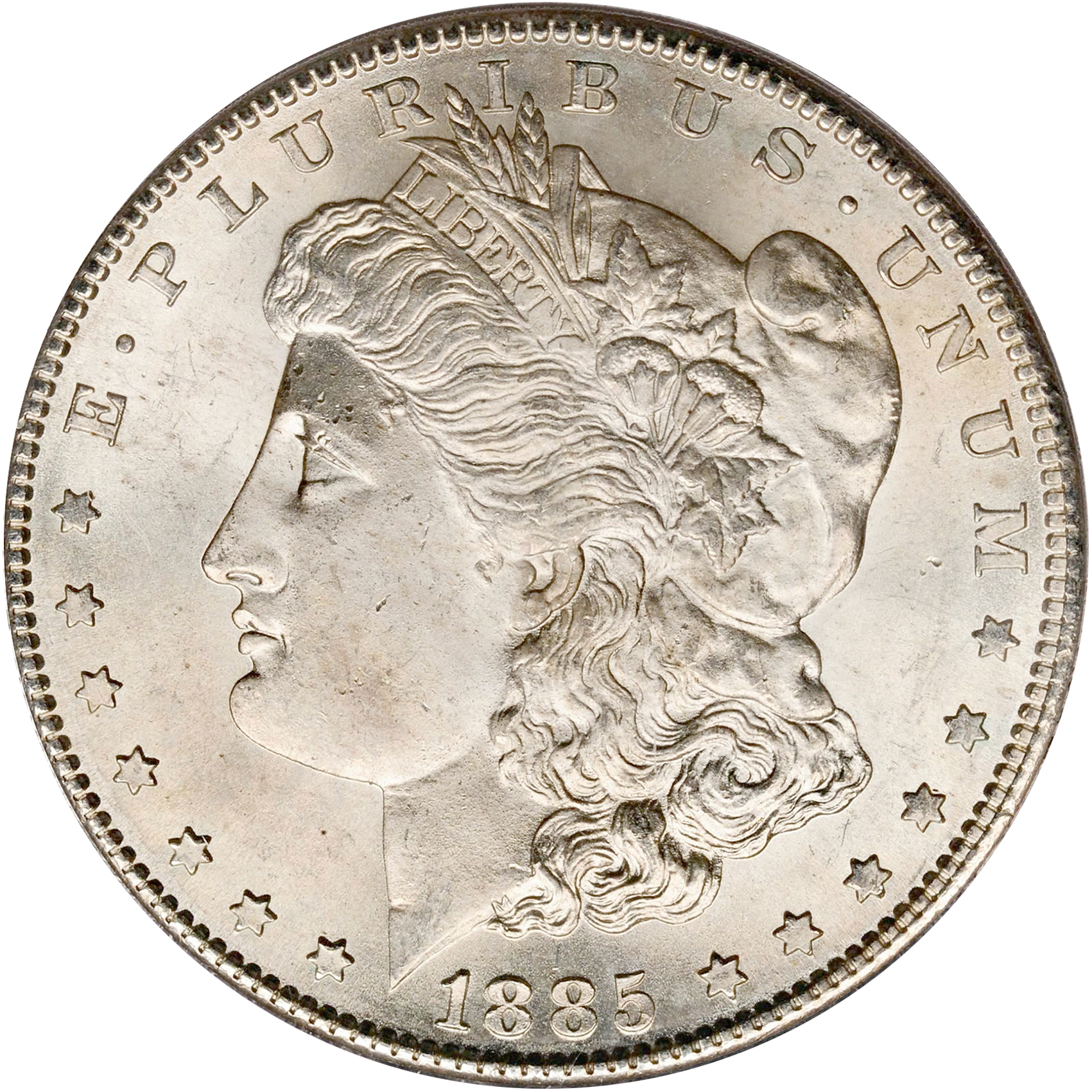 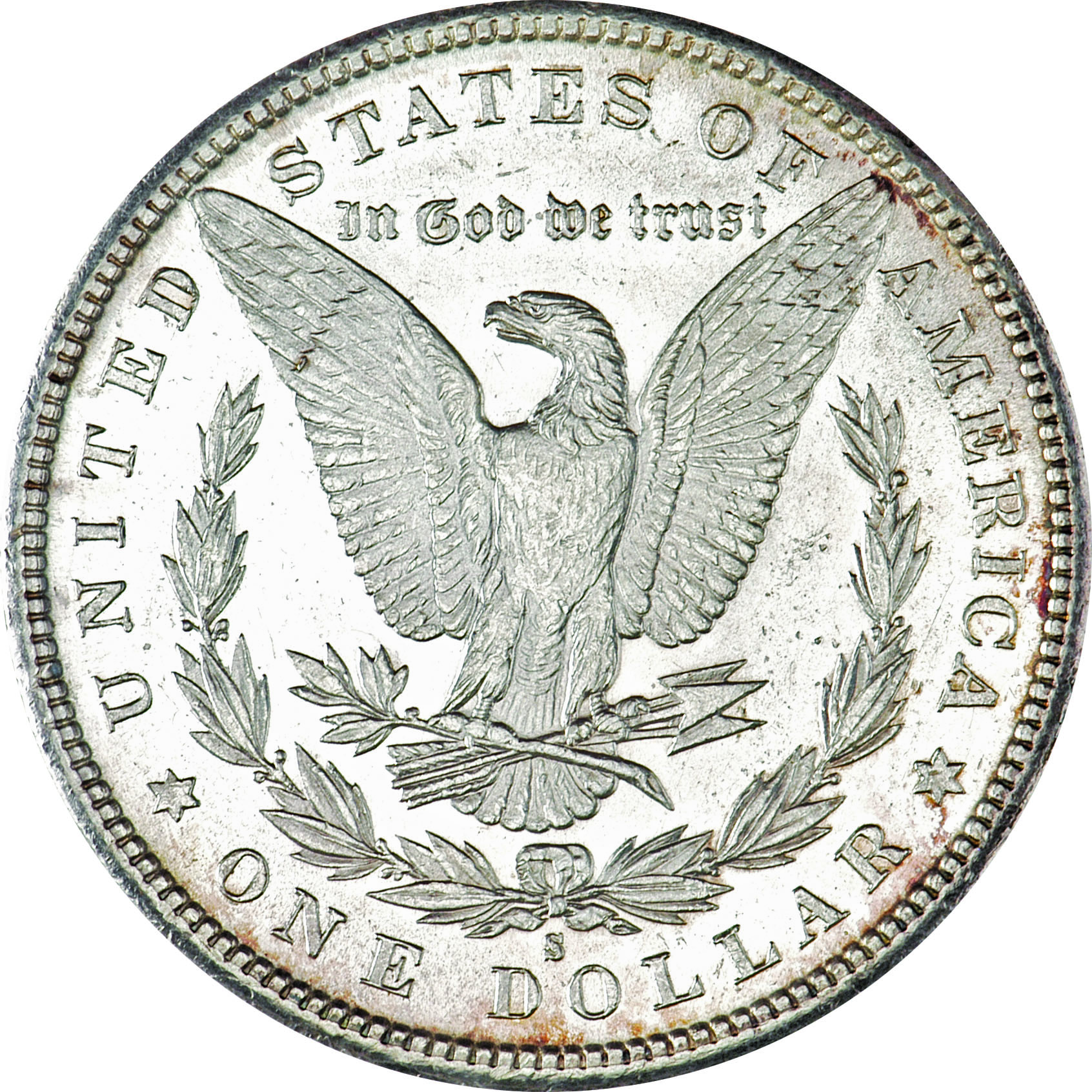 Again, the fake is above, the genuine coin below. (Photos of counterfeit courtesy of Cash In Your Coins, by Beth Deisher; photos of real coin courtesy of Stack’s Bowers Galleries) 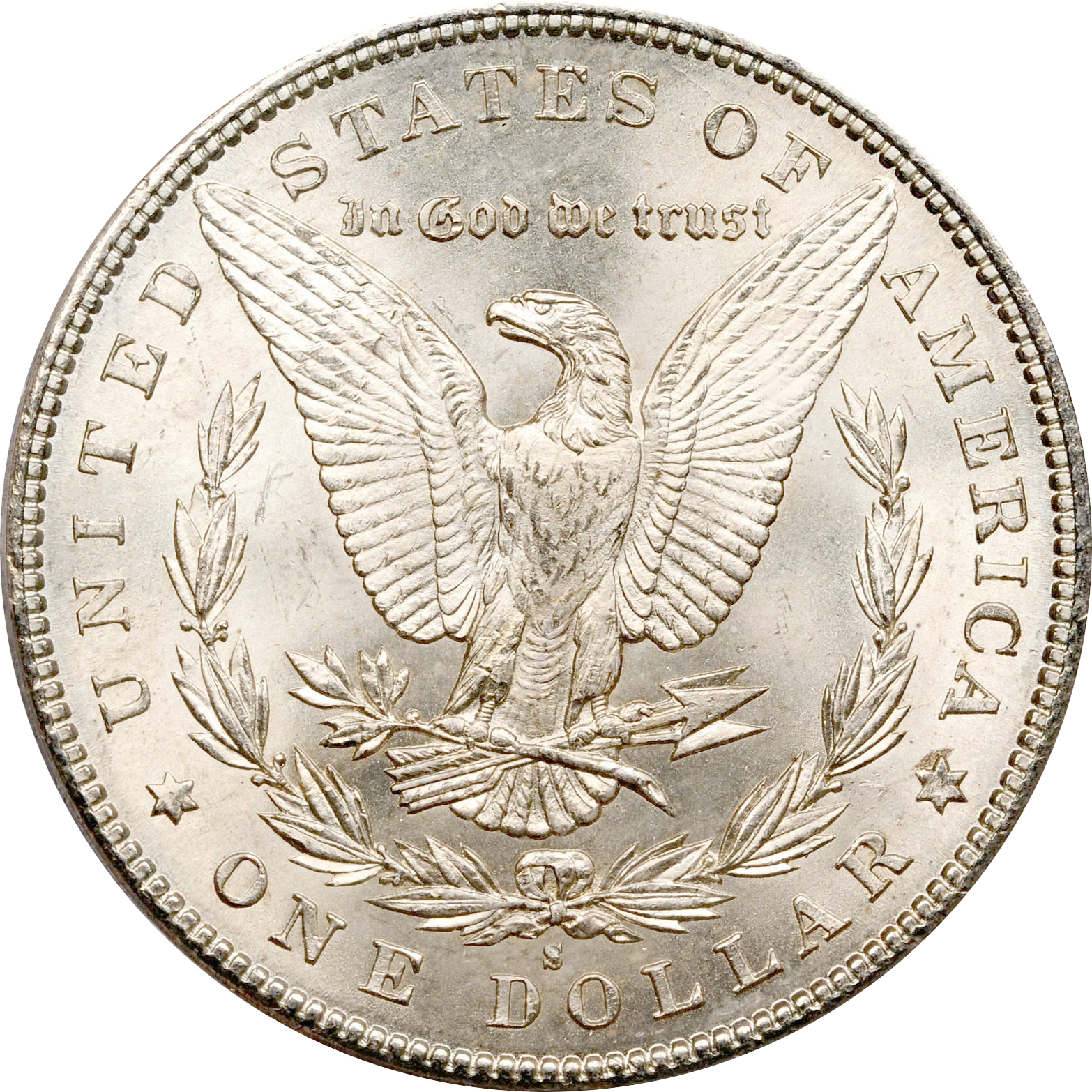 Next week, we’ll take a look at the problems that arise with different types of dies. Later posts in the series will discuss Gregory V. DuBay’s four-part counterfeit-classification system (with illustrations of dies and “coins” at each level), how to avoid counterfeit coins, the Hobby Protection Act, and more.