Every now and then Coingrader Capsule has to return to basics, reminding sellers of coins–especially online sellers–about routine numismatic terms, especially associated with grades.

In my personal blog, I routinely monitor coin auctioneers selling on the Internet portal Proxibid, paying special attention to photography and lot descriptions.

Only a few auction houses (mostly coin dealers selling on Proxibid, such as “Silvertowne Auctions“), use precise numismatic terms for rarity (a truly scarce coin, such as the 1894 Morgan dollar in any condition) and condition rarity (usually a common coin in lower grades and a scarcity in mint state, such as an 1884-S Morgan).

Bargain hunters on Proxibid often win condition-rarity coins because the auctioneer might not know numismatics well enough to fill out the lot description. However, increasingly we’re seeing numismatic terms for mint state misused, calling almost uncirculated, uncirculated and choice uncirculated coins “gem,” which has a distinct definition, that being “MS65” or better. (Sometimes the term “super gem” or “superb gem” is used for MS66 and above.)

Traditionally, almost uncirculated grades are AU50-58; uncirculated, MS60-63; and choice uncirculated, (MS64). Now that major grading companies NGC and PCGS are adding plus signs to grades, those definitions have changed slightly, by adding the + sign to the highest grade in each category. However, MS63+ is still uncirculated and not choice. 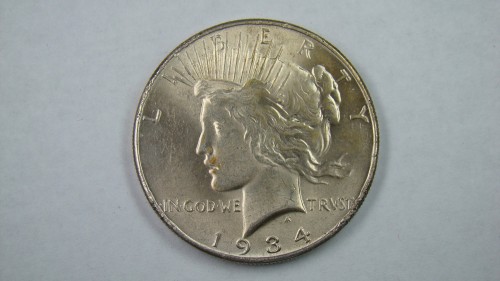 The coin is not gradable, worth only a small premium above its silver melt. Note the rim damage, which excludes a grade right off, as well as hairlines, rust-colored tone or residue, and bag marks. The lot description should read: “AU50 almost uncirculated rim-damaged Peace dollar.”

The 1934 coin, by the way, is a condition rarity, worth about $50 in almost uncirculated condition, $110 in low mint state, and as much as $425 in choice uncirculated. 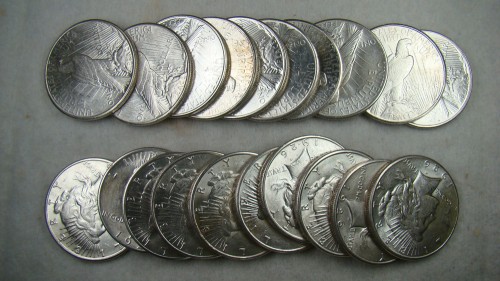 The same auctioneer, however, uses the correct term in describing a roll of 1926-S dollars as “choice uncirculated.” In viewing some 212 lots, the auction company describes 45 coins as “gem” or some 21% of the consignment. Only four or five by my count rate that designation.

Morgan dollars illustrate condition better than almost any other coin, because of the large surface area and focal point of the cheek. An MS65 coin must have brilliant or pristine-like surfaces, with minimal contact marks. Any that appear should be minor in less important areas, perhaps near a rim. 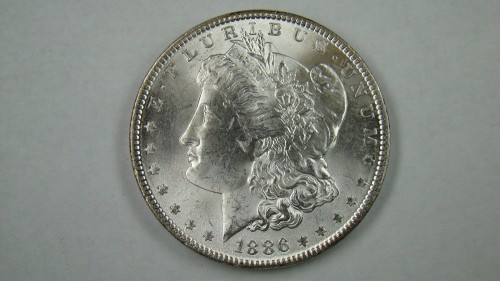 This 1886 dollar has clean surfaces with a strong strike so that flow lines–a faint pattern of metal flowing toward the rim, often providing that cartwheel effect–can be seen. If the surfaces were clean, it could quality as “gem.” However, this coin has hairlines on the cheek, a deep bag mark behind the eye and a scape in front of the ear. The lot description states: “gem brilliant uncirculated superb quality silver dollar.” It should read: “brilliant uncirculated common date silver dollar.”

A super or superb gem should have amazing luster and few if any visible contact marks.

Determining condition is difficult when inspecting a coin in person. It is doubly so when purchasing online. At least this particular auction house supplies some of the best photography on Proxibid, despite the oft-hyped lot descriptions, which may not even be intentional.

Moreover, this is one of my favorite auction houses. I have purchased quality coins from the company for years, mainly because I rely on his photography but not on his lot descriptions.

Never purchase a coin from an online seller without having access to crisp, expandable photos. Study them well, using a grading guidebook to sharpen your skill. My favorite books are Making the Grade by Beth Deisher and Coin Grading and Counterfeit Detection edited by Scott A. Travers with text by John W. Dannreuther.