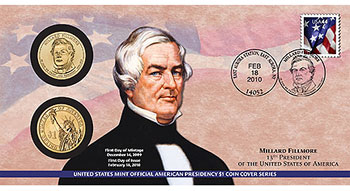 Each cover includes two 2010 Millard Fillmore Presidential Dollar coins, one from the Philadelphia Mint and one from the Denver Mint, taken from the first day of production at each facility. The coins are mounted on a custom display card placed within an illustrated envelope with a 44-cent Flags stamp.

The postmark for each card is February 18, 2010, East Aurora, NY. This is the first day the Millard Fillmore Dollar was released into circulation.

The Millard Fillmore $1 Coin Covers are priced at $15.95 each plus applicable shipping and handling charges.