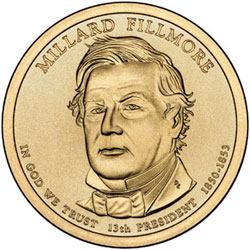 Among his acts as President were: the admission of California as a state, the establishment of the territories of both New Mexico and Utah, the appointment of Brigham Young as the first Governor of Utah, and starting the White House library.  As Vice President under President Zachary Taylor, he presided over the Senate during the contentious debates over the Compromise of 1850.

The coin bearing President Fillmore’s image is the 13th in the Presidential Dollar coin series.  Its obverse depicts Fillmore, his years in office (1850-1853) and the motto “In God We Trust”.  The reverse shows the Statue of Liberty in the same design as been depicted on all Presidential dollar coins.  The edge of the coin has the motto “E PLURIBUS UNUM”, the year of issuance, and the mint mark.

The Millard Fillmore Dollar will be available from the U.S. Mint in the following products:

The United States Mint has announced that a launch ceremony for the Millard Fillmore Dollar will be held on February 18, 2010 at the Moravia Central School in Moravia, NY.