(Anaheim, California) – An educator and acclaimed writer will give a free, informative presentation on defending the national motto, “In God We Trust,” in Anaheim, California on Thursday, August 11, 2016. The public is invited.

The program will be presented by Michael Fuljenz of Beaumont, Texas as part of the American Numismatic Association’s World’s Fair of Money®, a family-friendly, educational event, August 9 – 13. In a 1954 resolution the association supported the placing of “In God We Trust” on all U.S. currency.

The 45-minute, illustrated presentation by Fuljenz entitled, “Should ‘In God We Trust’ Be Banned From Money?,” will start at 1 pm on August 11 in room Avila A on the 4th floor of the Hilton Anaheim Hotel, 777 W Convention Way. Audience members will learn how the motto was developed and why its historical timeline is important to its continued use today.

“Some critics of ‘In God We Trust’ may be ignorant of the phrase’s long history or are deliberately ignoring the rulings of courts and resolutions of Congress,” explained Fuljenz, the President of Universal Coin & Bullion in Beaumont who has written award-winning articles about the national motto.

Commenting on the recent controversy about the motto’s placement on police vehicles in some communities, Fuljenz explained: “The patriotic motto has withstood a long line of legal challenges to appear on our money and on government-owned property. Courts have ruled that the motto can remain for ceremonial and patriotic reasons, for tradition and for passive use.”

“It first appeared on circulating United States coins in 1864. It has been on all our coins since 1938, became the only official national motto in 1956 with the signing of legislation by President Dwight Eisenhower, and has appeared on all our paper money since 1966,” said Fuljenz.

A lawsuit was filed earlier this year in Ohio seeking to remove the phrase from U.S. coins and paper money.

In 2013, a Federal Court judge in New York dismissed a lawsuit seeking removal of In God We Trust from our currency. The judge noted that “the U.S. Supreme Court has repeatedly assumed the motto’s secular purpose and effect.” In 2011, the U.S. House of Representatives overwhelmingly approved a resolution reaffirming it as the national motto and encouraging its display in all public schools and government buildings.

Fuljenz pointed out that while the motto first appeared on U.S. coins at the time of the Civil War it actually was inspired by events a half century earlier during the War of 1812.

“In 1861, Treasury Secretary Salmon Chase received a letter from a Pennsylvania minister who requested ‘the recognition of the Almighty God in some form on our coins.’ Chase instructed Mint Director James Pollock to prepare a motto. Pollock recalled a then-popular lyric in the now-seldom sung fourth stanza of The Star Spangled Banner: ‘And this be our motto – In God is our trust.’ Pollock had the words, ‘GOD OUR TRUST,’ placed on a few experimental patterns being tested in the early 1860s for proposed new designs for half-dollar and $10 denomination coins,” said Fuljenz.

“After consultations and debate within the Treasury Department, the words, IN GOD WE TRUST, first appeared in circulation on a new coin denomination, copper two-cent pieces, starting in 1864,” Fuljenz added.

Admission to the August 11 lecture is free. Admission to the World’s Fair of Money in the Anaheim Convention Center, August 9 – 12, will be $8 for adults, free for children, and free to everyone on Saturday, August 13. A $2 discount coupon is available online at www.WorldsFairOfMoney.com. 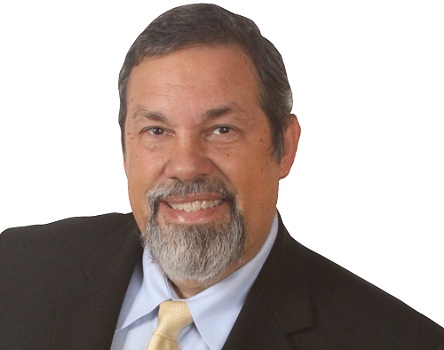 A former high school chemistry and physics teacher and principal of the Governor’s gifted students program in Louisiana, Mike Fuljenz has served on the Diocese of Beaumont Catholic School Board since 2007 and was President from 2010 to 2012. He was honored with the Catholic Charities of Southeast Texas Humanitarian Award in 2013.

Known as America’s Gold Expert®, Michael Fuljenz has won dozens of prestigious national and regional awards and honors for his consumer education and protection work in rare coins and precious metals. He recently received an Honorary Doctorate in Humane Letters from McNeese State University. A respected community leader in his hometown of Beaumont, Texas, Mike also has served with distinction as a consultant to the Federal Trade Commission, United States Mint and Royal Canadian Mint, and is on the Boards of Directors of the Jefferson County Texas Crime Stoppers organization, the Numismatic Literary Guild and the Industry Council For Tangible Assets.