Located in Massachusetts, a corner of New England and in one of the most historic cities in the US, the Museum of Fine Arts, Boston (MFA) is renowned for its vast and varied collection – housing more than 450,000 works and attracting more than one million visitors each year.  Founded in 1870, they have been at their current location since 1909 when their palatial, neoclassical structure was completed.  Prompted by the many donations of coins and medals over the years, the MFA took the unprecedented decision to feature these numismatic treasures in a permanent exhibition which is scheduled to open to the public on the 24th September. Of particular interest about this new exhibition is that it is the first time that a Museum of this reputation and esteem who are also primarily known for their art collection will be housing a permanent numismatic collection.

I had an opportunity to put some questions to Mr. Richard Grossman, MFA’s Consulting Curator for Numismatics before their debut – and I asked him about the motivation behind the idea to assemble a numismatic gallery in an Art Museum, which is the first of its kind, and what benefits there would be in merging the world of art and numismatics to both collectors & admirers. I also asked about the many important benefactors who made this project possible – especially that of Michael C Ruettgers, for whom the new coin gallery is named. The Gallery will begin by featuring 500 ancient Greek and Roman coins from the Museum’s world-renowned collection. If you have the opportunity to visit the beautiful region of New England, make the effort to stop by and visit the Museum of Fine Arts, Boston and indulge in both delights which promises to bring together the love of art and coins like never before!

MA: The inclusion of a numismatic collection at the Museum of Fine Arts, Boston is an exciting undertaking especially for coin enthusiasts, can you tell our readers why this project was undertaken and the timeframe associated with its organization…

RG: The MFA has collected and exhibited coins for over a century. But the concept of a dedicated coin gallery has developed over the past four years. Improving access to and awareness of the MFA’s world-class numismatic collection is the primary reason we are putting together a coin gallery.  The two other main factors in making this project possible are:  (1) the incredible generosity of our donor, Michael Ruettgers; and (2) the enthusiastic support of Malcolm Rogers, Ann and Graham Gund Director of the Museum of Fine Arts, Boston. Both of them recognized that the MFA’s enduring commitment to the art of coinage was something special, setting Boston apart from other large US art museums. And they both felt that a gallery designed expressly for coins would be the best way to showcase the MFA’s numismatic treasures. 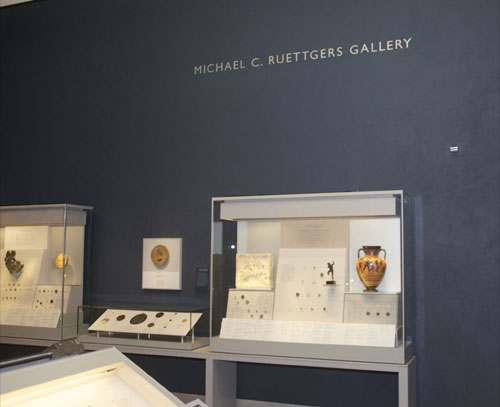 MA: How did the MFA arrive at the concept of featuring coins as works of art? This will indeed be a “first of its kind” approach…

RG: The ‘coins as art’ concept lies at the core of the MFA’s numismatic activities. As an art museum, we are very focused on exhibiting beautiful coins as works of art in their own right. But we also want to show coins as an integral aspect of visual culture – connected with, but not isolated from, works of art in other media. Coins share many symbols and stylistic conventions in common with other artworks. There was a process of reciprocal influence at work between coins and other art forms. Groupings of coins with objects in other media illustrate this dynamic.

MA: Speaking about your benefactor Michael C Reuttgers, I understand he has also gifted the Museum with 14 especially rare and noteworthy coins and as such, the new Gallery is named in his honor, but the collection will include over 7,500 ancient Greek and Roman coins, can you tell us where most these pieces were acquired from?

RG: As I mentioned, the MFA has been collecting coins – and specifically Greek and Roman coins – for over a hundred years. The collection has been assembled mainly through gifts and purchases. Some coins also came to the MFA from archaeological excavations at sites including Naukratis (in Egypt) and Assos (in Turkey).

The main contributors over the years to Boston’s outstanding holdings of Greek and Roman coins are: Edward Perry Warren, who from the end of the 19th century through first two decades of the 20th century purchased large numbers of coins on the European market on the Museum’s behalf and also donated numerous coins; Theodora Wilbour (who was one of the preeminent all-time female coin collectors) gave many important pieces from her collection in the 1930s and upon her death bequeathed the Theodora Wilbour Fund in memory of Zoë Wilbour, which funds the MFA’s numismatic acquisitions to this day; Cornelius Vermeule, who in addition to steering the collection in his role as long-time Curator of Greek and Roman Art, also donated several hundred coins; and most recently, of course, Michael Ruettgers.

MA: Can you tell us a little something about Michael C Reuttgers who some of our readers might not have heard of –  was it his idea to add this extraordinary collection to the MFA?

RG: Michael Ruettgers is a businessman and Boston-area resident. He is also a passionate collector of Roman gold coins. He made his first donation of coins to the MFA in 2008. This and subsequent gifts led to discussions about the challenges of exhibiting coins in a public museum setting. Mr. Ruettgers was drawn to collecting ancient coins because of the way these objects embody the past. He loves the excitement of examining a coin up close and feeling a connection with the people who made and used it – with their history and culture. The motivating idea behind the gallery was to recreate that exciting sense of coins as a portal to the past for visitors to the MFA.

MA: Regarding Mr. Reuttgers 14 ancient gold coins which launched the gallery, can you tell our readers about some of these coins – is there one coin which is of particular interest or notoriety?

RG: That’s a tough question, because they are all really phenomenal coins. But if I have to pick one, to me the standout is a very rare aureus of the Roman emperor Gaius, a.k.a. Caligula [2009.5038]. Caligula is known primarily as a madman, one of Rome’s worst emperors. His reign lasted just a few years, from AD 37-41, and ended with his murder. I find this coin interesting because it offers a very different perspective on this complicated character. Rather than a lunatic, we see an earnest young man striving to come off as an upright leader in the mold of his great-grandfather, Augustus (Rome’s first emperor), who’s portrait appears on the coin’s reverse.

MA: The Museum of Fine Arts, Boston will be the first Museum of its kind to feature and include a numismatic collection of any era, is it the aim of the MFA to introduce the beauty of Numismatics to those who are art lovers or might it be the other way around – to introduce coin collectors to fine art?

RG: Both, I would say. I expect everyone – art lovers, coin collectors, and the public at large – to be moved by the beauty of the coins on display. The gallery really isn’t targeted at any one group in particular. It’s meant to be a totally approachable introduction to ancient coins. It explores the various ways they inform us about Greek and Roman art, history, and culture. At the same time, knowledgeable coin collectors will no doubt enjoy finding themselves surrounded by several hundred of the most spectacular coins in the world – for example, the finest example of the Demareteion of Syracuse. And the presentation of coins side-by-side with other related works of art should be an eye-opening experience as well.

MA: I once spoke to the British Museum’s curator of Modern Money in 2009, we discussed the inclusion of coins and banknotes to the many temporary and permanent displays throughout the Museum itself where it was possible, has this been ever done here at the MFA?

RG: There is actually a substantial amount of numismatic material on permanent display in the MFA’s Art of the America’s Wing, which opened in 2010. And where it makes sense, we try to incorporate coins into temporary exhibitions. For example, the exhibition Aphrodite and the Gods of Love, organized by the MFA and now on tour, includes several ancient coins relating to the show’s themes.

MA: The new collection will consist exclusively of ancient coins, do you know if there will be future plans to expand this to include the collections to later eras or perhaps specific exhibitions devoted to events or people?

RG: Actually, the gallery’s focus is on ancient coinage, but it also explores the influence of ancient coins on post-antique art and culture. To that end, the gallery includes a number of later coins and medals that carry on the Classical  tradition, such as the Augustaler of the Holy Roman Emperor Frederick II [69.403].

MA: I understand that the MFA will be taking advantage of modern technical communications to enhance the display, can you explain what applications will be offered and what you think the benefit will be?

RG: The gallery incorporates New Media technology to serve as an interpretive aid. Ipads accompanying several of the cases will provide deeper levels of access to coins on display – images of faces of the coin, zoom-in capability, detailed descriptions, and a brief text about the coin’s significance. The ipad app will also be available to download for use at home. In addition, there will be an interactive touchscreen kiosk running a program that places visitors in the shoes of a ruler or official. Users will choose from among a menu of options as they design their own virtual coin.

MA: I get the impression that this latest technology will truly enhance the visitor to the new exhibitions as never before, I look forward to hearing very positive comments about the Gallery after its opening. Mr. Richard Grossman, Consulting Curator of Numismatics here at the Museum of Fine Arts, thank you very much for your time today.

I would like to also thank both Julie Frey and Karen Frascona, associates of the PR department of the MFA for their kind assistance with the writing of this article. The MFA is located at Avenue of the Arts.465 Huntington Avenue Boston, Massachusetts 02115-5523. Tel: 617-267-9300.  Open 7 days a week. For more information on exhibition hours, please visit their website at: http://www.mfa.org/