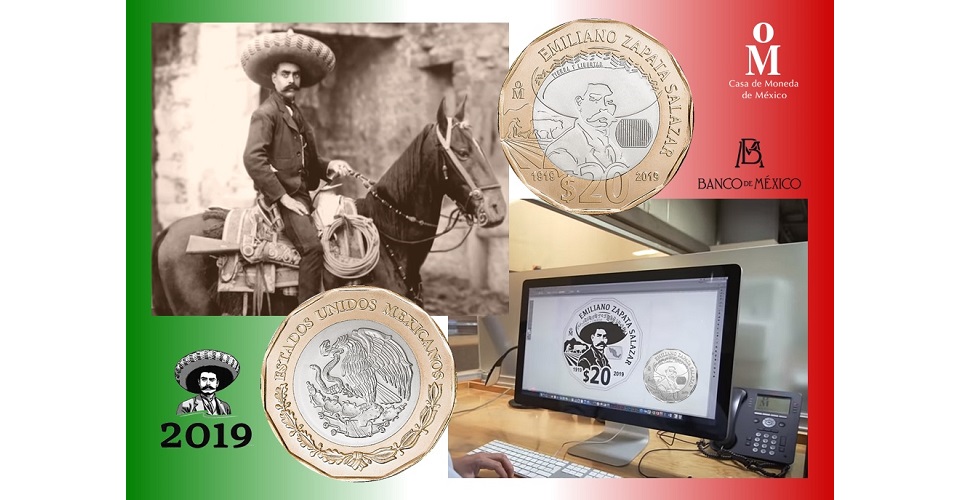 The Banco de Mexico has released new commemorative circulation-type 20-peso coins (U.S. $1.00) which are in memory of the centenary anniversary of the death of Emiliano Zapata Salazar (1879–1919). He is remembered in Mexico as a leading figure in the Mexican Revolution, which began in 1910, lasting until 1920. He emerged as the main leader of the people’s revolution in the Mexican state of Morelos and was the inspiration of the agrarian movement which would be known as “Zapatismo.” Born into a family of above-modest means in the small rural town of Anenecuilco in Morelos State, Emiliano Zapata y Salazar’s family were Mexicans of both Spanish and native Nahua heritage. Zapata was a respected figure in his hometown with a striking appearance which he took pride in: His large trademark moustache and good-quality clothing, among which some had described as an oversized sombrero. It was little wonder that he would ultimately come to the attention of Mexicans on a nationwide level.

His assassination in 1919, in which he was ambushed and gunned down, was met with huge levels of grief and deep mourning by much of the country. Zapata is regarded today as one of the most revered national heroes of Mexico. To many Mexicans, especially peasants and indigenous citizens, Zapata was a practical revolutionary who sought the implementation of liberties and agrarian rights. His goal was to achieve political and economic emancipation of the peasants in southern Mexico and lead them out of severe poverty. Zapata’s plan for land reformation influenced Article 27 of the progressive 1917 Constitution of Mexico that codified an agrarian reform program. Even though the Mexican Revolution did restore some land that had been taken under President Díaz, the land reform on the scale imagined by Zapata never materialised. However, a great deal of the significant land distribution which Zapata sought would later be enacted after Mexican President Lázaro Cárdenas took office in 1934. Cárdenas would fulfill not only the land distribution policies written in Article 27, but other reforms written in the Mexican Constitution as well.

The 2019-dated 12-sided bi-metallic circulation-type coins are produced by the Casa de Moneda de México at their facilities in Mexico City, on behalf of the Banco de Mexico. The obverse side includes a stylised design that is based on a well-known image of Emilio Zapata who was photographed on horseback and wearing his trademark sombrero. Along the rim of his sombrero is micro-text which reads TIERRA Y LIBERTAD. Above and to the right of the primary design is the text EMILIANO ZAPATA SALAZAR, seen along the edge. To the left of Zapata’s image is a scene of a man ploughing the soil, in reference to Zapata’s background as a farmer; the Mexican mintmark is above this image. Below his image are the commemorative years 1919 and 2019, separated with the coin’s denomination of $20. A latent image application is placed to the right of Zapata which includes a map of Mexico and can be seen when the coin is tilted. The reverse side includes a depiction of the national crest of an eagle with a snake in its right talon. The text ESTADOS UNIDOS MEXICANOS is shown above the crest.

As a circulation-type coin, they are available for their face value of 20 pesos from the usual channels of distribution such as commercial banks and post offices. For additional information about the coins and banknotes in use in Mexico, please visit the website of the Banco de Mexico.

Mexico: New coin released in celebration of the 500th anniversary of the founding of the city of Veracruz