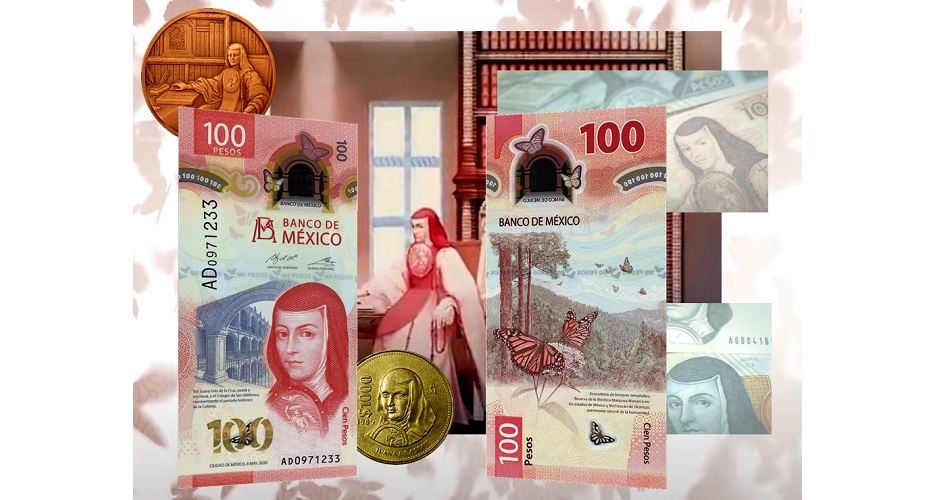 The Banco de Mexico have released (12th November) new 100-peso banknotes (U.S. $4.90) which are part of the bank’s current G series introduced in 2018. The new 100-peso banknote is the first denomination in the new G series to be printed on polymer and has undergone a completely new revised design. Featured on the new notes is one of Mexico’s national heroines, Sor Juana Inés de la Cruz (1648–1695), a noted Mexican writer, philosopher, composer, and poet of the Baroque period. De la Cruz has featured prominently on previous banknotes issued by the Banco de Mexico, as well as coinage. She was more recently depicted on the F Series 200-peso banknote until being replaced last year with the issue of a new design which is part of the current G series. From 1988 until 1992, Sor Juana Inés de la Cruz’s distinctive image appeared on 1,000-peso circulation coins until the peso was re-calibrated and three digits were removed from the hyper-inflationary currency.

The new vertically-designed 100-peso banknotes have also undergone improvements in terms of their security features to coordinate their transition to a polymer substrate. The design continues to highlight Mexican cultural and historic characteristics which are featured with new graphic motifs that represent historical identity and Mexican heritage.

The new 100-peso banknotes are produced in the Banco de Mexico’s new printing complex located in Jalisco, which was in operation just before the pandemic affected production in Mexico City. Measuring 132 by 65 millimetres and dated 8 MAY 2020, the predominant colour is red with a corresponding multi-colour underprint. 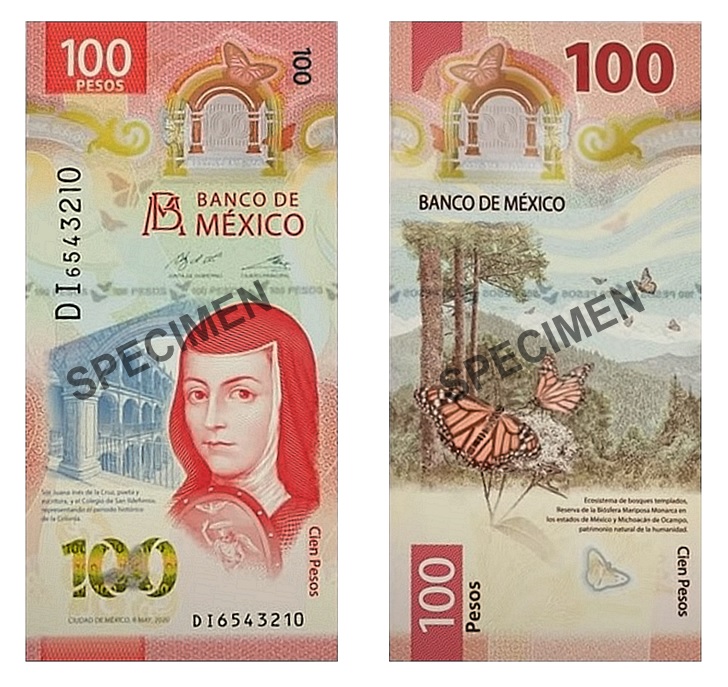 The face side illustrates the poet and writer Sor Juana Ines De La Cruz, taken from a well-known image of the writer and seen on previously issued banknotes and coins. A fragment of the main courtyard of the Old College of San Ildefonso, located in the Historic Centre of Mexico City is seen just to de la Cruz’s left. Above the primary design and logo of the Banco de Mexico is a clear window which also highlights an arch from the same structure. On the back side in multi-colour detail is an illustration of the temperate forest ecosystem of the Monarch Butterfly Biosphere Reserve, a natural heritage of humanity, located in the State of Mexico and Michoacán.

Tactile application — Over the transparent window is the numeral 100 embossed which has been included to aid visually impaired persons to identify the note. Over the portrait of Sor Juana Inés de la Cruz and the text BANCO DE MEXICO, as well as the Bank’s logo, is embossing over these design elements.

Iridescent print application — The design scroll element shown on the top half of the note adjacent to the clear window are printed with an iridescent ink which shimmers when tilted under a source of light.

Holographic application — The numeral 100 placed to the lower-left of the portrait of Sor Juana Inés de la Cruz includes smaller holographic images of the numeral 100 when tilted.

The new 100-peso note replaces a paper bill featuring the likeness of Nezahualcóyotl, a ruler of the city-state of Texcoco in the 15th century. The F series banknotes remain legal tender but will be gradually withdrawn from circulation. Due to the onset of the pandemic, the launch, as well as the manufacture of the new 100-peso banknotes, was delayed. It is estimated that by the end of 2020 there will be around 70 million 100-peso banknotes of the G series in circulation. The 100-peso bill is the third most demanded by Mexicans, the first being the 500-peso value. Currently, 11% of all banknotes presently in circulation in Mexico are those of the 100-peso denomination.

The fourth and fifth members of the G series of banknotes scheduled for release in 2021 will be 1,000-peso and 50-peso denominations. The new 1,000-peso banknotes will feature the 33rd president of Mexico, Francisco I. Madero, Revolution-era feminist Hermila Galindo, and revolutionary Carmen Serdán. A jaguar will feature on the back side next to an image of the ancient Mayan city of Calakmul. The Banco de Mexico has reiterated the issue of 2,000-peso banknote denominations are not planned in the immediate future though provisions have been made as part of the G series. For additional information about Mexican coins and banknotes, please visit the website of the Banco de Mexico.