On May 5, 1862, some 4,500 Mexican troops defeated a well-equipped French force of 8,000 in Puebla, Mexico, at Forts Loreto and Guadalupe—a victory celebrated as “Cinco de Mayo.” In honor of the holiday, we’re shining a spotlight on two numismatic items from Mexico that celebrate this victory: the 2012 circulating commemorative 10 pesos and the 1962 silver and gold medals. (The following excerpt is adapted from the Whitman Encyclopedia of Mexican Money, volume 2: Modern Coins of Mexico, 1905 to Date, by Don and Lois Bailey.)

The Battle of Puebla

In 1862 Mexico was deeply in debt to the governments of Britain, France, and Spain. Economic troubles at home were such that President Benito Juárez García was forced to suspend payment on these debts. The three European creditors came together and sent troops across the ocean with the intention of forcing Mexico to resume payment—or at least, that was the intention of Britain and Spain. Once the ships arrived and the Spanish had captured the port at Veracrúz, they learned, along with the British, that Napoleon III had intended all along to conquer Mexico outright, and they withdrew. With the United States embroiled in a civil war, France was almost guaranteed success in establishing a puppet state in Mexico, laying claim to Latin American trade as well as to Mexico’s rich silver mines.


The first few military encounters were successes for the French. In one of these encounters, Mexican general Ignacio Zaragoza and his troops were badly beaten in the field; Zaragoza withdrew his men to Puebla and its stout, well-supplied forts of Loreto and Guadalupe, which stood on two opposite hilltops.

The French launched a badly planned assault on the forts; when their artillery ran out of ammunition, their entire reserves had to join the fight. General Zaragoza sent his cavalry out to attack the weakened force from both flanks, and sent more men to attack them as they retreated. By the time the French withdrew, they had lost more than 450 troops to approximately 80 of Zaragoza’s.

It was a comparatively small loss for the French, however, as they subdued Mexican forces elsewhere, took Mexico City, and established a puppet empire with Maximilian at its head. In spite of Napoleon III’s success—or perhaps even because of it—Mexicans were intensely proud of the victory at Puebla. Shortly before the capital fell and President Juárez was forced to flee with his government to northern Mexico, he declared May 5 would henceforth be a national holiday. Today it is popularly known as Cinco de Mayo.

In 1962, Mexico issued medals in both silver (shown here) and gold to commemorate the centennial of the Battle of Puebla. The common design shows General Ignacio Zaragoza on horseback, riding between enemy mortars in the foreground and the forts in the background: 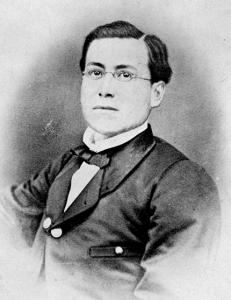 Ignacio Zaragoza Seguín was originally a student of the seminary, but he was drawn to the military during the repressive rule of Antonio López de Santa Anna. Zaragoza proved to be an excellent strategist, and under his command, the volunteer army capably ousted the dictator.

Under President Benito Juárez García, Zaragoza served for a few short months as secretary of war. His military brilliance was soon needed on the field, however, and he resigned his post in order to lead the defense against Napoleon III’s invasion. Having successfully repelled the French from Acultzingo and then Forts Loreto and Guadalupe in Puebla, he wrote to the president, “Las armas nacionales se han cubierto de gloria” (The national arms have been covered with glory), a quote that would later appear on 500-peso banknotes from 1995 to 2010.

Zaragoza died of typhoid fever soon after his heroic May 5 victory; he was 33 years old. 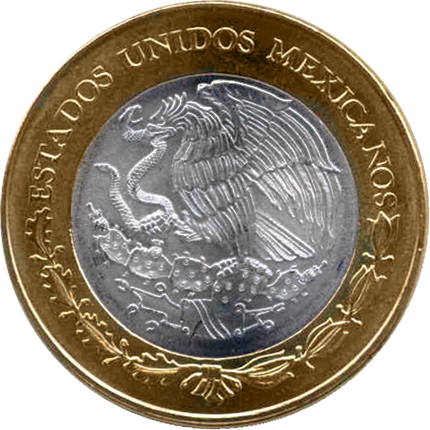 On the obverse, the alpaca center holds the national coat of arms with the eagle facing left. On the bronze-aluminum outer ring is the legend ESTADOS UNIDOS MEXICANOS above, with a half-wreath of oak and laurel below. 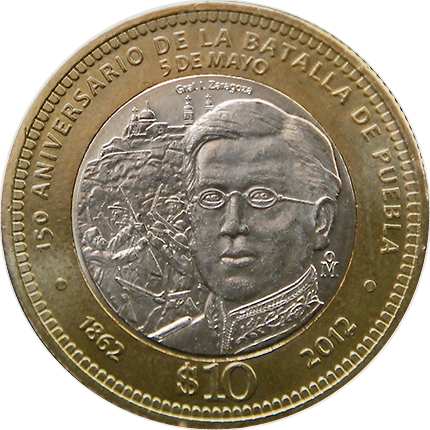 On the reverse, the outer ring carries the denomination $10 at the bottom, flanked by the dates 1862 and 2012; around the top, 150 ANIVERSARIO DE LA BATALLA DE PUEBLA with 5 DE MAYO just below. At the center is a bust of General Ignacio Zaragoza in three-quarter profile to the left, with Gral. I. Zaragoza in tiny letters above. In the background to the left of Zaragoza is a battle scene: French invaders and Mexican troops, with the forts of Oreto and Guadalupe in the distance.   ❑