The Central Bank of Ireland will launch (12th November) a new coin which features various aspects of some of the country’s celebrated sites that include architecture from the medieval period. The new coin highlights the Rock of Cashel, also known as Cashel of the Kings and St. Patrick’s Rock. Cashel is considered one of the most spectacular tourist attractions in Ireland and one of the most visited. This magnificent site and its ruins were even visited by Queen Elizabeth II during her historic visit to the Republic of Ireland in May 2011.

The Rock of Cashel was the traditional seat of the kings of Munster for several hundred years prior to the Norman invasion. In 1101, the King of Munster donated his fortress on the Rock to the Church. The extraordinary complex of buildings and chapels has a character of its own and is regarded as one of the most remarkable collections of Celtic art and medieval architecture to be found anywhere in Europe. Few remnants of the early structures survive but the majority of buildings on the current site date from the 12th and 13th centuries. 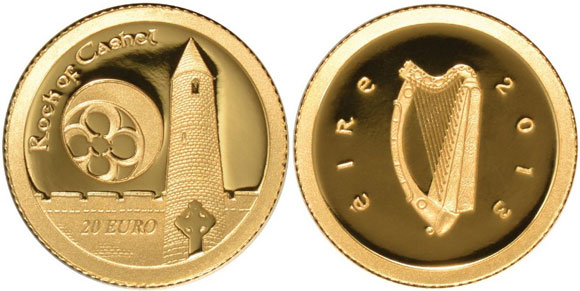 Produced by the Mayer Mint, Germany on behalf of the Central Bank, The coin is designed by artist Mary Gregoiry, whose work for 2013 also included the popular and sold-out Irish silver crown honoring the writer James Joyce. Depicted on the obverse of the coin is the Round tower – The oldest, tallest and most preserved of the buildings rising to a height of 28 meters or, 90 feet. Dating from around 1100 AD, its entrance is 12 feet from the ground and has since been filled around the base with mortar for safety reasons. Also included in the design is a Gothic rose window along with a Celtic cross, seen in many locations at Cashel.

The reverse includes the traditional depiction of the Harp, the text “EIRE” and the year of issue “2013” the coin is launched on the 12th November, orders are now being accepted.

For more information on this and other coins offered by the Central Bank of Ireland, please visit their website at: http://www.centralbank.ie/paycurr/collector/Pages/Coinsets.aspx Information is offered in both English and Gaelic – international orders fulfilled.