The 1916 and 1917 McKinley Memorial gold dollars are two of 13 classic gold commemoratives that the U.S. Mint struck between 1903 and 1926. Struck to fund a memorial to President William McKinley in Niles, Ohio, the birthplace of the 25th president of the United States, the issue was less than a success, and a relatively small number of the 100,000 pieces authorized by the Act of February 23, 1916, were sold. While today it is not considered to be the most popular of the gold commemoratives issued, the pieces are in demand, and despite the relatively small mintage there are still quite a few pieces available to collectors, mostly in Uncirculated condition, making this a relatively affordable issue.

William McKinley was a Republican politician born on January 29, 1843, in Niles, Ohio. After brief stints as a postal clerk and teacher he enrolled in the Union Army following the outbreak of the American Civil War, enlisting in the 23rd Ohio Infantry. McKinley’s regiment saw fighting in numerous battles, including South Mountain, Antietam, and Cedar Creek. At the end of the War McKinley was promoted to brevet major before leaving the Army and becoming a lawyer. In 1877 his political career began when he took his first congressional seat.

McKinley would serve as the governor of Ohio from 1891 to 1895 before seeking the Republican nomination for the presidential election of 1896, in which he was successful at the Republican National Convention held in St. Louis in July. In the election that year he defeated Democrat William J. Bryan from Nebraska. One of the heavily debated issues was the currency standard of the United States. At the time the United States had basically been on a gold standard since 1873; this limited the money supply but was beneficial for foreign trade, in particular with Great Britain. Bryan was a proponent for the free coinage of silver, while McKinley wanted to remain on the gold standard. (The reasons for this are beyond the scope of this article, but one good book on the subject is The Crime of 1873, by Robert R. Van Ryzin. The book describes in detail the events that led this to be such an important point of discussion in the presidential election of 1896.) 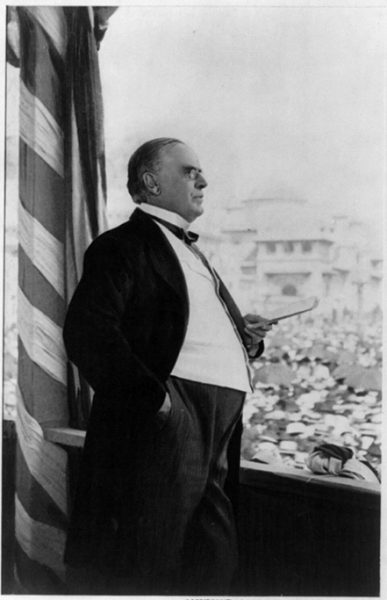 President McKinley delivers what will be his last public address, given at the Pan-American Exposition in Buffalo, N.Y., on September 5, 1901, the day before he is shot.

McKinley’s first term encompassed an important part of American history, during which the Spanish-American War led to territorial expansion of the United States. McKinley once again defeated Bryan during the presidential election of 1900, but his second term would be short-lived. On September 6, 1901, as McKinley was visiting the Pan-American Exposition held in Buffalo, N.Y., Leon Czolgosz, a Polish immigrant and anarchist, shot him in the chest. McKinley died of his wounds just over a week later, on September 14, 1901. His vice president, Theodore Roosevelt, succeeded him.

McKinley would first appear on a 1903 commemorative gold dollar struck to commemorate the Louisiana Purchase Exposition held in 1904. More than a decade later, friends proposed another commemorative issue to honor the late president, who had been very popular in his day (but was later overshadowed by the popularity of Theodore Roosevelt). The new commemorative issue was approved; at first, a silver dollar was planned, but since McKinley was a promoter of the gold standard, a gold dollar was deemed more appropriate. The issue would be another collaboration between Charles E. Barber (obverse) and George T. Morgan (reverse).

Barber’s obverse shows the head of William McKinley, facing left. The portrait is surrounded by the words UNITED·STATES·OF·AMERICA and ·McKINLEY·DOLLAR·. Morgan’s reverse depicts the McKinley Memorial Building, which the funds from the sale of the McKinley commemoratives would be used to finish. Below the building is the date; above the building is McKINLEY BIRTHPLACE, with MEMORIAL near the bottom of the coin. Between the two words and the building is NILES / OHIO, separated by a flag placed on top of the building.

The Philadelphia Mint struck 20,000 McKinley gold dollars in August and October of 1916, and they were sold to the public for $3 each. This initial mintage was only a small number of the 100,000 that had been authorized. As with other commemorative gold dollars, sales were poor, most likely because of the high premium that was charged over face value. Nonetheless, the following February another 10,000 coins were struck, this time dated 1917, creating two different issues of this commemorative. Sales continued to be poor (despite the fact that the sale price was later dropped to $2.50), and of the 30,000 originally struck a total of 10,000 were returned to the Mint and melted.

There is some confusion regarding the number of pieces that were distributed of both dates. Most sources list the net mintage of both dates as approximately 10,000 each, the result of allocating the pieces melted to the 1916 mintage. Yet the 1917 is certainly scarcer and more difficult to find than the 1916. Q. David Bowers, among others, thinks that the 10,000 coins melted included at least 5,000 coins dated 1917, leaving a net mintage of approximately 5,000 coins for the 1917 issue, which makes sense judging by the overall availability of that date. This would mean that a net mintage of approximately 15,000 pieces dated 1916 is required to match the balance of 20,000 coins distributed of the type. Given that many collectors of the era sought commemoratives by type, most of the pieces sold were likely dated 1916 (the only date available when the coins were first released). Since the Mint never kept track of which coins it melted we will probably never know the truth.

Today the McKinley dollar is generally available, and it remains popular as one of only 11 collectible gold commemoratives from the early period (the Panama-Pacific 50-dollar gold pieces are out of reach for most collectors). Most of the McKinley dollars that were sold remain in Uncirculated condition, and pieces are generally available up to the MS-67 level. It has to be said, however, that pieces grading above MS-65 can be considered very scarce to rare. As mentioned above, the 1917 issue is more difficult to find than the 1916 issue, and the population reports roughly show twice as many 1916s certified than 1917s.