In his remarks Deputy Director Peterson said, “”Every day, across the Nation, the United States Mint connects Americans through coins, and in 2015 it will be our great privilege to connect America to the legacy of the U.S. Marshals Service and your distinguished service to our country since 1789.” 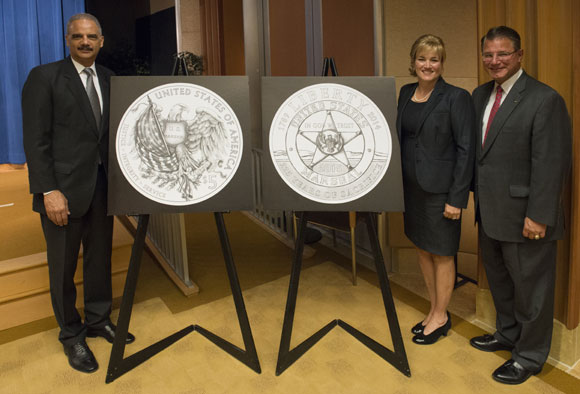 The coin program was authorized under Public Law 112-104, which provides for the minting and issuance of up to 100,000 $5 gold coins, 500,000 $1 silver coins, and 750,000 half-dollar clad coins in commemoration of the 225th anniversary of the establishment of the Nation’s first law enforcement agency, the United states Marshals Service. The official celebration for the Service will take place on September 24, 2014. The United States Mint expects to begin accepting orders for the coins in early 2015.

Attorney General Holder said in remarks, “I view today’s unveiling not only as a unique opportunity to celebrate one of our nation’s oldest and most impressive traditions of service, but also to thank these heroic men and women who risk their lives to keep us safe, whose efforts make our country stronger, and who will continue to guide and inspire the very best of federal law enforcement for years to come.”

U.S. Marshals Service Director Stacia Hylton said, “The coins represent the work of all the men and women behind the badge who have served our country throughout the decades, risking their lives to secure our judicial process and protect our communities and children from violent offenders.” 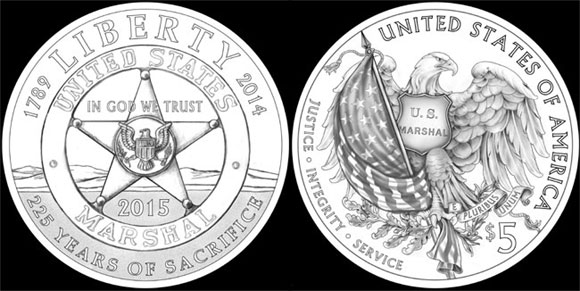 The $5 gold coin included in the program is intended to be emblematic of the sacrifice and service of the men and women of the Service who lost their lives in the line of duty. The obverse design features a current badge with the inscription “225 Years of Sacrifice” along with the anniversary dates “1789” and “2014”. The reverse depicts an eagle with a shield on its chest inscribed with “U.S. Marshal”. 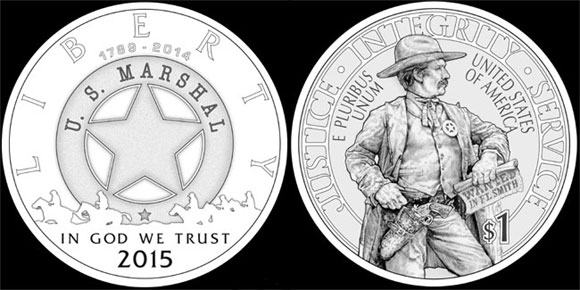 The silver dollar is emblematic of the United States Marshal’s legendary status in America’s cultural landscape. The obverse carries the image of a historic badge and U.S. Marshals on horseback. The reverse features a frontier U.S. Marshals holding a wanted poster which reads “Wanted in Ft. Smith“. Fort Smith, Arkansas is the future home of the U.S. Marshals Museum. 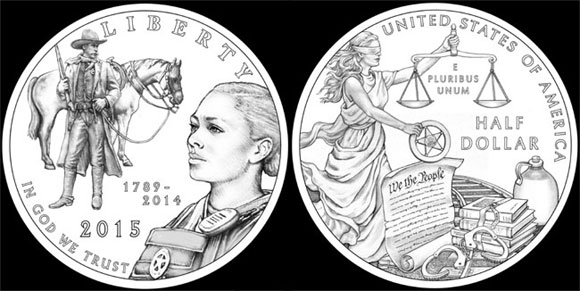 The commemorative coin program is completed with a half dollar, highlighting the role of the US Marshals Service in changing the nation. The obverse design features a present day U.S. Marshals in the foreground with an old west U.S. Marshal in the background. The reverse features a depiction of Lady Justice holding scales in one hand and a badge in the other. Other design elements show ties that the Marshals have to the United States Constitution, with themes including Whiskey Rebellion and the rule of law; slavery and the legacy of inequality; and the struggle between labor and capital.

Under the authorizing legislation, surcharges of $35 per gold coin, $10 per silver dollar, and $3 per half dollar will be added to the cost of the coins. The first $5 million of the surcharges will be distributed to the US Marshals Museum for the preservation, maintenance, and display of artifacts and documents. Additional amounts will be distributed in thirds to the National Center for Missing & Exploited Children, the Federal Law Enforcement Officers Association Foundation, and the National Law Enforcement Officers Memorial Fund.