On December 4, 2012, President Obama signed a bill into law which authorizes the Secretary of the Treasury to mint and issue gold and silver commemorative coins honoring American author and humorist Samuel Langhorne Clemens, better known to the world as Mark Twain.

The bill H.R. 2453: Mark Twain Commemorative Coin Act was introduced on July 7, 2011 by Rep. Blaine Luetkemeyer of Missouri. The bill was passed in the House of Representatives on April 18, 2012 and passed by the Senate with amendments on September 22, 2012. The first amendment specified that the surcharges to be distributed to the University of California would be for the benefit of the Mark Twain Project at the Bancroft Library. The second amendment requires the Secretary of the Treasury to take necessary actions to ensure that the commemorative coin program does not result in any net cost to the government. The House approved the Senate amendments on November 15, 2012. 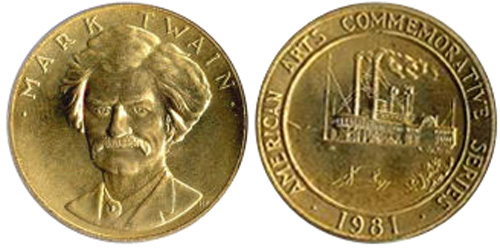 The bill provides for a surcharge of $35 per gold coin and $10 per silver coin to be added to the sales price and distributed to the following organizations:

The image pictured above is of a one ounce gold medallion produced by the United States Mint in 1981 as part of the American Arts Gold Medallion series.