Today, December 3, 2009, the United States Mint released the 2009 Margaret Taylor First Spouse Gold Coin. This represents the final release of the year for the series created to honor the Nation’s First Ladies. 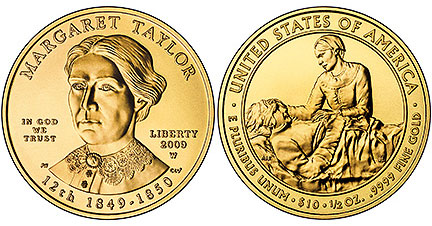 The Margaret Taylor First Spouse coin features a portrait of Margaret Taylor on the obverse and a scene of her nursing wounded soldiers during the Seminole War on the reverse. She served as the First Lady from 1849 to 1850 during the 12th Presidency. The obverse was designed by Phebe Hemphill and sculpted by Charles Vickers. The reverse was designed by Mary Beth Zeitz and sculpted by Jim Licaretz.

There is a maximum production limit of 40,000 coins across both options. The US Mint imposed an initial ordering limit of ten coins per option per household for at least the first week of sales.