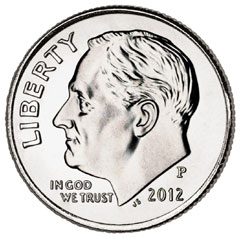 On December 18, 2012, President Obama signed a bill into law which authorizes the Secretary of the Treasury to mint and issue commemorative silver dollars to recognize and celebrate the 75th Anniversary of the March of Dimes Foundation.

The March of Dimes was founded by President Franklin D. Roosevelt as the National Foundation for Infantile Paralysis on January 3, 1938. After Roosevelt’s passing in 1945, his portrait would be featured on the dime due to his association with the organization and its annual fund raising campaign. The Roosevelt Dime has been issued from 1946 to present.

The March of Dimes Commemorative Coin Program will include up to 500,000 silver dollars struck in 90% silver and 10% copper with a weight of 26.73 grams and diameter of 1.500 inches.The coins will be minted in proof and uncirculated qualities and may be issued only during the 1-year period beginning on January 1, 2015.

According to the authorizing legislation, the design of the coin “shall be emblematic of the mission and programs of the March of Dimes, and its distinguished record of generating Americans’ support to protect our children’s health.” Additional direction is provided indicating that the design “shall contain motifs that represent the past, present, and future of the March of Dimes and its role as champion for all babies, such designs to be consistent with the traditions and heritage of the March of Dimes.” The design will be selected by the Secretary of the Treasury after consultation with the March of Dimes, the Commission of Fine Arts, and review by the Citizens Coin Advisory Committee.

The sales price for the 2015 March of Dimes Silver Dollars will be equal to the sum of the face value of the coin, the cost of designing and issuing the coins, and a surcharge of $10 per coin. The Secretary of the Treasury is required to take such actions necessary to ensure that minting and issuing the coins will not result in any net cost to the United States government.

Surcharges collected from the sale of coins will be distributable to the Secretary to the March of Dimes to help finance research, education, and services aimed at improving the health of women, infants, and children.