The United States Mint has announced the design selections for the upcoming commemorative coin to be issued to mark the 75th anniversary of the March of Dimes Foundation. The nonprofit organization was founded by President Franklin D. Roosevelt in 1938 to combat polio and now works more broadly to improve the health of mothers and babies.

The commemorative coin program was authorized under Public Law 112-209, which was signed into law December 18, 2012. The legislation calls for the issuance of up to 500,000 silver dollars to be issued in recognition and celebration of the establishment of the March of Dimes Foundation. The designs are to be emblematic of the mission and programs of the March of Dimes and its distinguished record of generating Americans’ support to protect our children’s health. The legislation specifically calls for the designs to contain motifs that represent the past, present, and future of the organization and its role as a champion for all babies.

An initial slate of 22 different obverse and 18 different reverse design candidates were released by the United States Mint earlier this year. As provided by the authorizing legislation, the design candidates were reviewed by the Commission of Fine Arts and Citizens Coinage Advisory Committee, who each provided their recommendations. The final designs are selected by the Secretary of the Treasury taking into account the recommendations of the two groups as well as the March of Dimes Foundation. 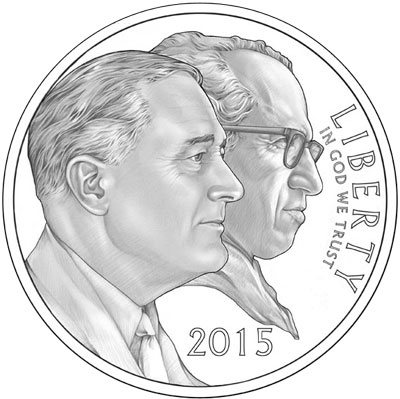 The selected obverse design features profile portraits of President Franklin D. Roosevelt and Dr. Jonas Salk, two leaders in the fight against polio. This is intended to represent the past of the organization. The inscriptions read “Liberty”, “In God We Trust” and the date “2015”. 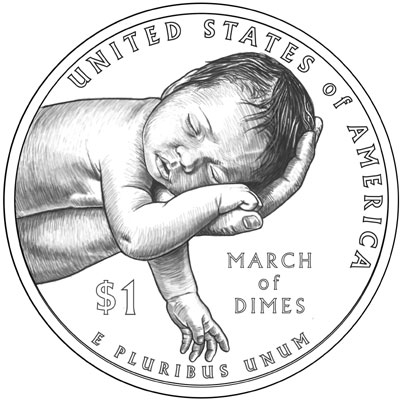 The reverse design contains a depiction of a baby sleeping peacefully in the hand of its parent. This is intended to represent the present and future mission of the foundation to advance work that supports healthy pregnancies and addresses prematurity. The inscriptions read “United States of America”, “March of Dimes”, the denomination “$1”, and “E Pluribus Unum”.

The 2015 March of Dimes Commemorative Silver Dollars will be released by the United States Mint next year. The pricing for the coins and the official release date have note yet been announced. The pricing for the coins will include a surcharge of $10 per coin distributable to the March of Dimes to help finance research, education, and services aimed at improving the health of women, infants, and children.