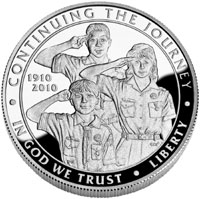 The following events related to coins and coin collecting are scheduled to take place during the month of March 2010. The month will include the Whitman Coin & Collectibles Expo in Baltimore and the ANA National Money Show in Fort Worth.

There are only two numismatic products from the United States Mint that have release dates listed for this month. The highly anticipated 2010 Boy Scouts of America Centennial Silver Dollar will go on sale March 23 and a new Presidential Dollar product is expected to go on sale March 26.

There are two more events expected to take place in the month of March 2010 that do not have exact dates scheduled yet. The first event will be the release of the Abigail Fillmore First Spouse Gold Coin. This will be the first release for the 24 karat gold series this year.

The second event will be the unveiling of the final designs for the 2010 America the Beautiful Quarters. Although the design candidates have been available for some time, the US Mint has still not announced the final designs.