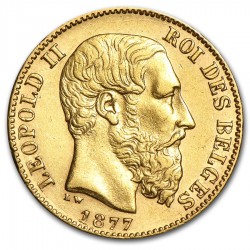 Last October, Florian Bautsch was walking with his metal detector when he stumbled upon an unusual gold piece in Lüneburg, Germany, south of Hamburg. Piqued, he kept searching, eventually discovering nine more of the coins—enough to spur him to notify local archaeologists that he might be on to something big.

After a two-week excavation, the archaeologists did find something big: a trove of 207 gold coins buried one meter deep at the foot of a tree. Bearing stamps from Belgium, France, Italy, and the Austro-Hungarian Empire, the coins had been buried in separate pouches that had deteriorated except for their seals, which were each marked with a swastika, an imperial eagle, and a “Reichsbank Berlin 244” stamp.

Lüneburg archaeologist Edgar Ring stated his conviction that the discovery constituted a stolen collection belonging to the Nazi-era Reichsbank. Degraded pasteboard found with the coins was subjected to chemical analysis, from which it was estimated the bundling of the collection occurred between 1940 and 1950.

This week, the coins went on display at the Lüneburg Museum.

As for Florian Bautsch, his reward money came to a modest 2,500 euros. He’s not disappointed, though, according to The Local. Lower Saxony State archaeologist Henning Hassman told the Süddeutsche Zeitung he considers it lucky that someone as knowledgeable as Bautsch came upon the coins. For his part, Bautsch stated that his primary concern after making his discovery was doing his part to advance scientific knowledge.