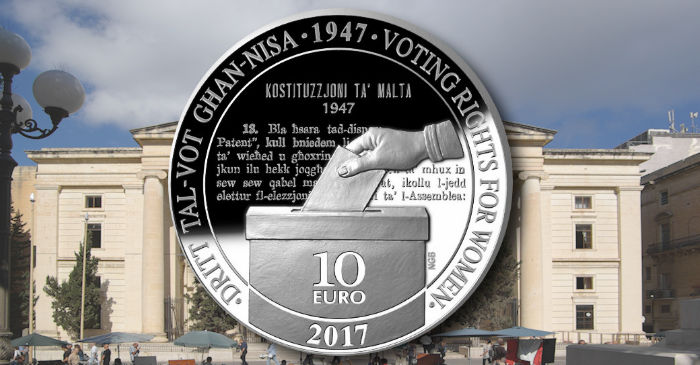 The Central Bank of Malta have unveiled (3rd November) their latest collector coin, which celebrates the 70th anniversary of universal suffrage in the small nation. On the 25th to the 27th October in 1947, the women of Malta (still a British Crown colony) exercised for the first time their right to vote. This had been enshrined in the 1947 constitution, which was promulgated in September 1947 and reconstituted self-government to Malta. During the Second World War, in which the Maltese were singled out specifically by the Axis powers as a strategic target, the people of Malta heroically defended both their own territory as well as contributing gallantly to the Allied war effort.

In recognition of the bravery of the Maltese in the face of such hostility from the German Luftwaffe, King George VI of the United Kingdom awarded the George Cross to Malta to the then–British colony. The George Cross continues to appear on Malta’s national flag to this day. A diarchical or dual-rule system of government was introduced by the 1947 constitution recommended by Sir Harold Alfred MacMichael (1882–1969), who was appointed constitutional commissioner by Great Britain. The document ensured self-government for internal affairs in Malta and provided for a unicameral system which granted the right to vote to men and women over the age of 21. The constitution was adopted on the 5th September 1947, just in time for Malta’s elections, which were scheduled for the 25th to the 27th October. This was the first election in which women were able to participate, and in which Dr. Paul Boffa (1890–1962) was duly elected prime minister — the first after home rule was re-established after World War II.

The coin is designed and engraved by artist Noel Galea Bason. The obverse includes text from article 18 of the 1947 constitution, which guarantees the right of all adult Maltese citizens to cast a vote. This article allowed women to participate in the process for the first time. The design of a hand casting a vote is surrounded by an inscription in both English and Maltese, along with the denomination of the coin, 10 EURO, and the year of issue, 2017.

The reverse depicts the crowned Maltese crest surrounded with the twelve stars of the European Union.

The Central Bank is accepting pre-issue orders until the issue date of the 1st December. For additional information on this and other coins issued by the Central Bank of Malta, please visit their website.