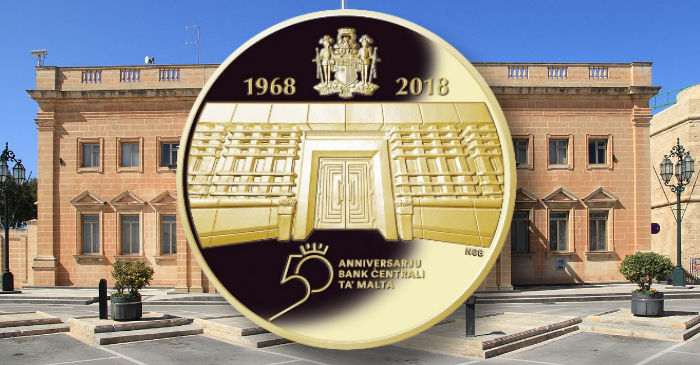 The Central Bank of Malta have issued (17th April) new silver crown coin and gold Proof coins which are minted in celebration of their own institute, which was opened for the first time 50 years ago. In the wake of Maltese independence, which was achieved on the 21st September 1964, the need to establish a central bank which would oversee the issue of the Maltese lira, previously issued by the Government of Malta.

The Central Bank of Malta Act was originally published by means of Act XXXI of 1967 and has been amended a number of times. The most recent amendment to the Central Bank’s charter was by Acts I and IV of 2007 which provided for the Central Bank’s membership within the Euro-system in order for Malta to introduce the single currency. The doors of the Central Bank officially opened on the 17th April 1967, and operations were housed in an early 20th-century building which was completed in 1924 and formerly known as the Vernon Institute. The bank had occupied the building since 1967 and its lease was arranged to last almost 100 years from its initial opening. The interior was demolished in 1968 and renovated to a very modern standard but also preserved the neoclassic façade.

In 2011, the bank embarked on a project related to the development of new premises within St. James’s Counterguard. These works commenced in 2012 and were finalised in 2017 with the building being officially named Binja Laparelli in honour of the 16th century military engineer Francesco Laparelli. Apart from offering modern meeting and conference facilities, the building also houses the bank’s library, archives, and offices.

Both gold and silver coin examples are produced by the Royal Dutch Mint at their facilities in Utrecht on behalf of the Central Bank and are designed and engraved by Noel Galea Bason. The reverse of the coins carries a representation of the façade of the Central Bank of Malta’s newly-built premises, Binja Laparelli, located in St. James Counterguard in Valletta. The coins also bear a 50th-anniversary logo designed by Michael Grech and Daniel Galea of the MCAST Arts and Design Institute. Selective gold plating has been used. It is the first time that such a technique has been used on Maltese numismatic coins.

The obverse of the coins features the coat of arms of Malta together with the coins’ denomination and year of issue, 2018.

The silver coins are encapsulated and presented in a custom-branded Central Bank of Malta case along with a certificate of authenticity. The gold coin was available only by an allocated lot or lottery number drawn by a public notary which was announced in February. For additional information about the silver crown coin, please visit the website of the Central Bank of Malta.