The Central Bank of Malta have issued (15th October) their second commemorative coin which marks significant dates and developments of Malta’s constitutional history. This year’s theme is “Majority Representation” and highlights Malta’s moves to a government with full representation in parliament of its citizens at a time when it was just beginning to take root in a handful of European countries.

In time, a general feeling in Malta developed in favor of an elected majority, which would be in a better position to enact legislation. This was not an easy objective as the United Kingdom, then the rulers of Malta considered the small island country a strategic fortress where security had to be assured within strict parameters. Following the unification of Italy (1861) and Germany (1871), Maltese political parties were formed and mobilized, with the Partito Nazionale led by Dr Fortunato Mizzi. Its main demand was an elected majority which eventually materialized in 1887 with the granting of Representative Government. Having gained full independence from the United Kingdom in 1964, Malta retained Queen Elizabeth II as head of state until 1974 when it was declared a Republic within the Commonwealth of Nations. 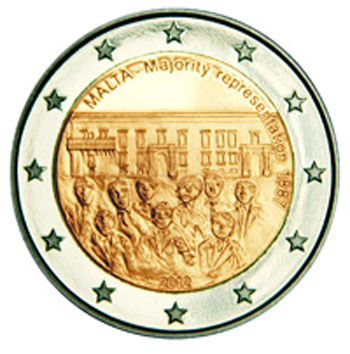 The coin, issued as a €2 denomination, includes a design which incorporates both the Governor’s Palace and a crowd of voters based on a photograph taken back in 1887 when representative government was granted. The design is the work of artist Gianni Bonnici. The reverse side is that of the standard and common reverse for all EURO coinage issued since 2002 and designed by the graphic artist Luc Luycx. The primary design of the reverse includes a map of the European continent along with twelve stars.

Struck at the Royal Dutch Mint,  the coin is produced in both FDC (400,000 mintage) and proof quality (5,000 mintage). Last year’s commemorative coin represented the first in the current series and was issued to mark “First Elected Representatives”. Three more coins will follow until 1015.

For more information on this and other coins issued by the Central Bank of Malta, please visit their website at: http://www.centralbankmalta.org/site/2eur_coin2012.html. International orders fulfilled.