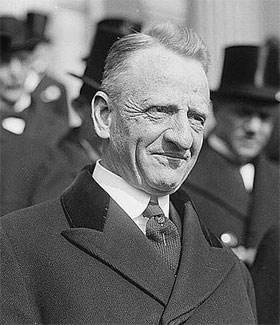 In 1936 Lynchburg, Virginia celebrated the 150th anniversary of receiving a city charter, with festivities held in the fall of that year. Part of the celebrations included the issuance of a commemorative half dollar, something quite commonplace in this year, even if the subject commemorated was of mostly local interest. In this, the Lynchburg, Virginia Sesquicentennial Commemorative Half Dollar is nothing special. However, there is one particular aspect of significance in the fact that the man who appears on the obverse of the coin, Senator Carter Glass, is only one of four living persons ever to be portrayed on United States coinage.

Lynchburg, Virginia is located in the center of the State and today has a population of approximately 75,000. Known as the “City of Seven Hills” (the city is located in the foothills of the Blue Ridge Mountains), the area saw its first European exploration in the late 17th century, but settlement would not start until the middle of the 18th century. John Lynch started a ferry service across the James River (it was known as the Fluvanna River at the time) in 1757 on land owned by his father, known as Lynch’s ferry, and later built a bridge crossing the river at the same spot. The settlement that arose at the crossing would later be named for him. As one of the few spots where the James River could be crossed, the spot soon became a shipping center and hub for the tobacco trade. In 1786 Lynchburg, as it would be known, received a city charter and growth commenced on the south side of the James River.

The Lynchburg Sesquicentennial Association was responsible for the issuance of the commemorative half dollar struck to commemorate the sesquicentennial. The act of May 29, 1936 created the issue, with a maximum mintage of 20,000 coins. The Philadelphia Mint struck the coins, which were first sold in September of 1936, ahead of the official celebrations held in Lynchburg in October 1936. The coins were sold for $1 each, plus 25 cents postage per order and sales were excellent, with potential buyers being informed that the entire issue was sold out shortly after sales started. 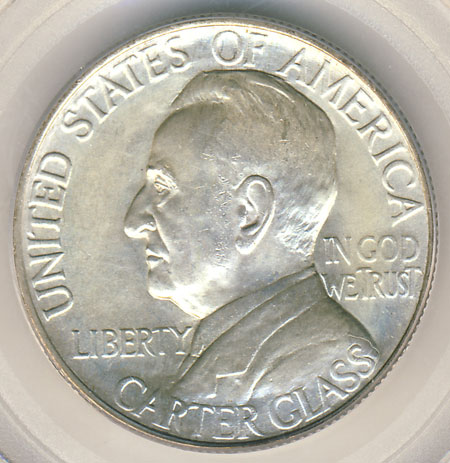 Charles Keck was appointed as the designer for the coin, after having previously designed the Panama-Pacific Gold Dollar (1915) and the Vermont Half Dollar (1927). On the obverse is the portrait of Senator Carter Glass of Virginia. Carter Glass was born in Lynchburg in 1858. A newspaper publisher by trade, Glass served in the United States Senate for the Democratic Party from 1920 to 1946 and was arguably Lynchburg’s most famous citizen. His portrait was favored over that of John Lynch, since no contemporary image of the latter existed. Glass himself was less than appalled by the appearance of his image on a circulating coin, and even contacted the Philadelphia Mint to see if it was possible to stop production of the coins, to which he was informed that there was no law that could prevent a living person from appearing on a coin, and that the issue would go ahead. As the second living person to appear on United States coinage and one of only four people to hold this honor, Glass is certainly in a very exclusive group. There is a law that restricts the use of a living person’s image on paper money, but this does not apply to coins. Despite this, the United States Mint very rarely uses this opportunity. Above the portrait of Glass is UNITED STATES OF AMERICA. Behind him is IN GOD WE TRUST, and in front is LIBERTY. CARTER GLASS is near the bottom rim and completes the obverse design. 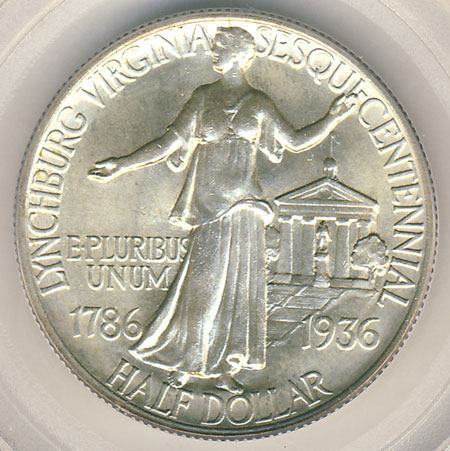 The reverse features an image of Liberty, dressed in a draped gown, her arms spread. Below her left hand (viewer’s right hand) is the old Lynchburg Courthouse, with the Confederate Monument placed in front of the courthouse. This is one of several commemorative coins with a confederate element. Next to Liberty’s feet are the dual dates 1786 and 1936, and in the left field is E PLURIBUS UNUM. Along the rim is LYNCHBURG VIRGINIA SESQUICENTENNIAL.

As previously mentioned the issue sold out swiftly, and most have been retained in uncirculated condition. All grades up to MS-65 are easily found, although not all are very appealing, with many being rather lackluster paired with a weak strike. Such pieces are better avoided. Pieces graded MS-66 and MS-67 are also frequently encountered, although the Lynchburg becomes rare at the latter level. Strike is usually the problem that a coin won’t grade MS-67, as pieces graded MS-66 already tend to have a very limited number of surface abrasions. Finer pieces are virtually unheard of and tend to trade very infrequently. Like many other issues of this era buyers would receive this set in a special holder, which had places for five coins total. Because of the sulfur in these holders many coins come spectacularly toned, although if any remain in the original holders most will have toned very dark by now.