Following the review of the designs for Eliza Johnson, the Citizens Coinage Advisory Committee discussed the design candidates for the Lucy Hayes First Spouse Gold Coin and Medal. The broader series includes one-half ounce 24 karat gold coins and bronze medals bearing the spouses of each President, or a rendition of Liberty for those Presidents who were not married during their term in office. Kaarnia Budow presented the 3 observe designs and the 6 reverse designs for the gold coin and bronze medal for Lucy Hayes, the wife of President Rutherford B. Hayes. 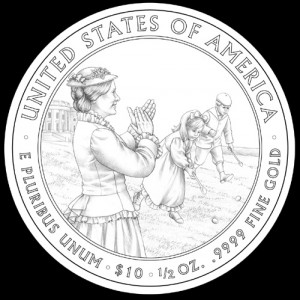 Donald Scarinci started the comment section of the discussion. He indicated he would pick obverse design 1, but would be listening to the other committee members’ comments as he was “easily persuadable on this.” For the reverse designs, he favored the third as it was an action scene and did not include her husband.   Rick Meier was next, and indicated that he liked obverse design 1 and reverse design 3, repeating the comments of Mr. Scarinci regarding depicting the President on a coin meant for the First Spouse.

Michael Ross echoed Mr. Meier’s comments and preferences, but cautioned that the theme of the White House Easter Egg Roll would be repeated when the Mint reached the Mamie Eisenhower coin, and regretted there not being any designs noting Mrs. Hayes’ activism in the temperance movement.  Michael Brown, attending the meeting via telephone, continued the trend, supporting obverse design 1 and reverse design 3. 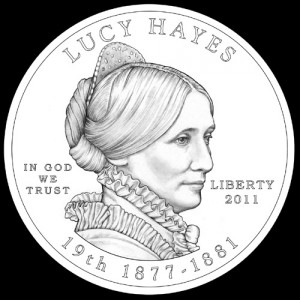 Heidi Wastweet, however, bucked the trend and offered obverse design 2 as her favorite, thinking it had “a lovely arrangement of texture.” She did fall into line with the previous four members in her comments on the reverse, emphasizing the lack of independence of the wife from her husband. To her, reverse designs 3 and 4 “are close, but I’m still not in favor of any of them.”   Roger Burdette also preferred obverse design 2, commenting that the hair and dress treatments would be “preferable” to the “monotonous” and “flat” look that facing portraits turn out on coins. As for the reverse designs, he didn’t like any of them; “none of them tell us anything about what Lucy Hayes felt was important to her.” He, like Ms. Wastweet, gave his tepid support to reverse designs 3 and 4, but also commented on the irony that the portrait for the images was from the couple’s silver anniversary, but there was no silver coin being produced.

Chairman Gary Marks was last, stating that he was “looking again for something that honors the First Lady in her own right.” in the obverse designs, supporting design 2 “because it’s different.” He supported the Easter Egg Roll depicted in reverse design 3, but  stated that “the First Lady didn’t need to be there.”

Editor’s Note: After this article was written, the US Mint announced the selection of obverse design 2 and reverse design 3 for the Lucy Hayes First Spouse Gold Coin and Medal. 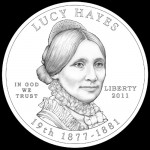 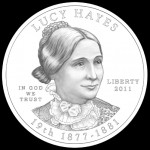 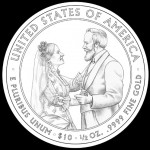 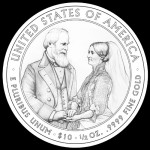 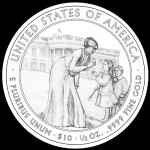 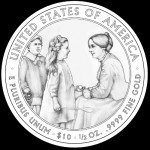 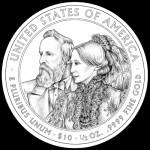