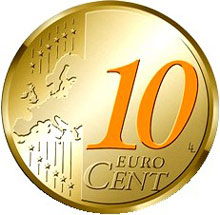 The Royal Dutch Mint have launched (8th May) their first circulation coin value with an additional element of color in honor of the upcoming UEFA European Football Championship tournament scheduled to kick off from the 8th June.

The coin’s numeral of “10” euro-cent on the reverse has an Orange color, symbolic for the Dutch National team whose colors are also orange.  Also included on the reverse of the collector’s coin-card is the schedule for the games which the Dutch National ream are scheduled to play in. The coin included is an FDC strike of the 10 cent denomination which can be removed from the card. The obverse of the coin depicts a stylized image of Queen Beatrix and the date of issue, “2012”.

The coin-card is scheduled for release in late May but will not be available in Post offices within the Netherlands. The UEFA championships are hosted jointly by Poland and Ukraine, the first tournament which the Dutch National team will play in will be in Krakow on the 9th June against the Danish National team.

For more information on this and other coins offered by the Royal Dutch Mint, please visit their website at: http://www.knm.nl/Het-Oranje-Geluksdubbeltje-2012/nl/product/2257/