Preliminary production figures for the Hot Springs National Park Quarter suggest that there will be far fewer coins from America the Beautiful Quarters Program reaching circulation than the prior 50 State Quarters Program. 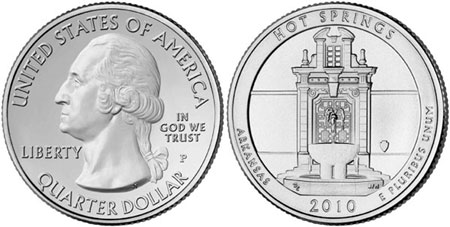 This is below the average production level of last year’s District of Columbia & U.S. Territories Quarters Program, which had an average of 106.033 million coins produced for each design.

It is significantly below the average production level for the 50 State Quarters Program, which had an average of 695.952 million coins produced for each design. At the extreme, the quarter featuring Virginia reached a final production of more than 1.5 billion coins. If the current pace of production holds steady for each design of the America the Beautiful Quarters series, cumulative production won’t reach 1.5 billion for another five years or so.

In addition to the decreased availability of the new quarters due to lower production, changes in the distribution process will make it even harder for collectors to obtain America the Beautiful Quarters through the channels of circulation. From 1999 to 2008, the Federal Reserve Banks had procedures in place, which allowed financial institutions to order unmixed quantities of the newly released quarters during specified ordering windows. Many banks would order a certain amount of each new State Quarter design to satisfy the demand of their customers.

From 2009 onwards, special ordering procedures were not provided, meaning that distribution would take place to meet transactional demand, without regard to a specific design. Banks may or may not receive some of the newest design in the course of their regular orders for circulating coins.

The United States Mint does allow individuals to order America the Beautiful Quarters bags and rolls directly, however these coins are priced at a premium to face value. The offerings are deemed to be numismatic offerings even though they contain circulating quality coins. The US Mint currently offers two roll sets containing 80 quarters ($20 face value) for $32.95 and bags containing 100 quarters ($25 face value) for $35.95. A shipping and handling charge of $4.95 is also added to each order. These coins can be found online at http://catalog.usmint.gov/