Today, December 11, 2009 at 5:00 PM ET, the United States Mint will officially end sales of this year’s Louis Braille Bicentennial commemorative coin products. Under law, the coins may be issued until the end of the calendar year, but sales of commemorative coins typically end earlier to allow time for order processing. 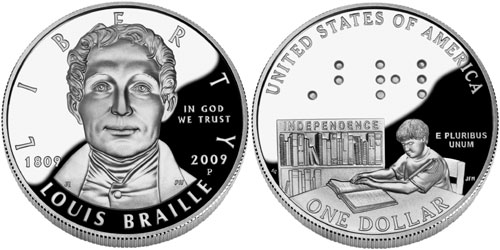 The Louis Braille Silver Dollar first went on sale March 26, 2009. The coin features a portrait of Louis Braille on the obverse designed by Joel Iskowitz and sculpted by Phebe Hemphill. The reverse of the coin features a child reading a Braille book in front of a bookcase with the word “Independence”. Braille code for the letters “BRL” appears above the scene. This represents the first time in history that readable Braille characters have been included on a United States coin.

Surcharges added to the cost of each coin will go to the National Federation of the Blind to further programs which promote Braille literacy. As of December 6, 2009, the US Mint had sold 217,874 of the coins across all options. The maximum authorized mintage was set at 400,000 coins.