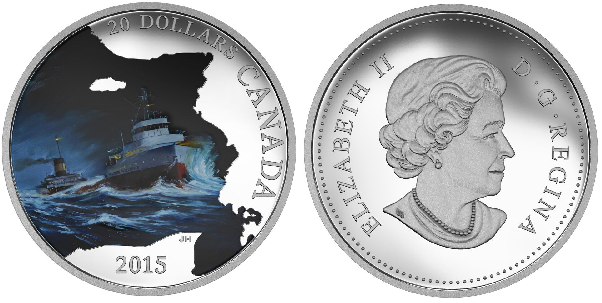 The Royal Canadian Mint has launched the latest coin in its exciting series chronicling maritime disasters and ships that have gone missing in Canadian waters. The new coin focuses on the S.S. Edmund Fitzgerald, an American freighter that was lost while sailing through Lake Superior in November 1975, during one of the regions’ worst-ever winter storms.

Although theories abound as to what caused the ship to sink, the official report placed probable cause on flooding from the waves that rolled over the ship’s deck and into the cargo hold through ineffective hatch closures. No distress signal was ever sent out, adding to the mystery of the ship’s quick demise; to this day, there is still a sense of loss over the Fitzgerald’s tragic defeat in her quest for a safe passage through a raging winter storm.

At 222 m or 725 feet in length, it was designed to measure just shy of the maximum length allowed to pass through the yet-unfinished St. Lawrence Seaway and the locks at Sault St. Marie. At the time of its launch, it was considered the largest freshwater freighter vessel to ever sail the Great Lakes. 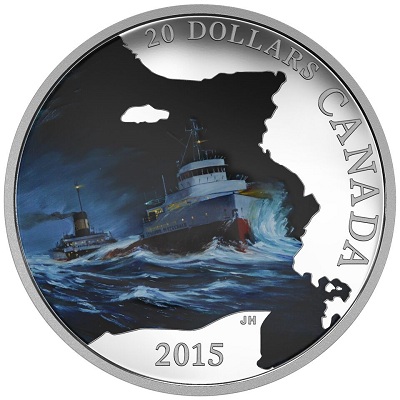 On November 9, 1975, the S.S. Fitzgerald sailed out of Superior, Wisconsin, at 2:15 p.m. with a full cargo of iron ore pellets destined for Detroit, Michigan. The weather had been mild and the waters calm, but forecasters were tracking a storm moving in from the Plains. Joined by S.S. Arthur M. Anderson, both ships opted to alter their course closer to the Canadian shoreline, where it was hoped the Canadian highlands would offer some protection from the brunt of the storm.

By 1 a.m. on the morning of November 10, the Fitzgerald recorded winds of 52 knots and waves measuring 3 meters or over 9 feet high. Near-hurricane force winds seemed to pick up strength throughout the day while visibility was greatly reduced. Conditions only grew worse; at 3:15 p.m., the Captain of the Anderson watched the Fitzgerald round Caribou Island, where it seemed to skirt close to Six Fathom Shoal. Fifteen minutes later, the Anderson received a radio transmission from the Fitzgerald indicating that the vessel had taken on water and had developed a list, while losing two vent covers and a guard rail.

Shortly after, the Fitzgerald lost both radars and became dependent on the Anderson to guide her through the rough waters, but a snow squall with winds at more than 100 km/h, or over 60 mph, cloaked the Fitzgerald in the evening’s darkness and she was no longer visible to the Anderson. In a radio transmission made at 7:10 p.m., the Anderson inquired how the Fitzgerald was faring, to which the Fitzgerald’s captain answered, “We are holding our own.” Tragically, these would be the last words heard from any of the Fitzgerald‘s 29 crew members.

Between 7:20 and 7:30 p.m., the S.S. Edmund Fitzgerald suddenly and quietly slipped beneath the frigid waters of Lake Superior–just 27 km or 16 miles from the entrance to Whitefish Bay–in Canadian waters that measured 160 meters or 525 feet deep. During the ensuing three-day search and rescue operations, Canadian vessels such as S.S. William Clay Ford and S.S. Hilda Marjanne assisted in the search for survivors on both sides of the lake. The Canadian Coast Guard deployed its aircraft to survey from the air, while the Ontario Provincial Police organized a beach patrol along the lake’s eastern shore, but no survivors were ever found. The ship’s final resting place is protected by law, which ensures the wreck will lie undisturbed out of respect for those who lost their lives that day. 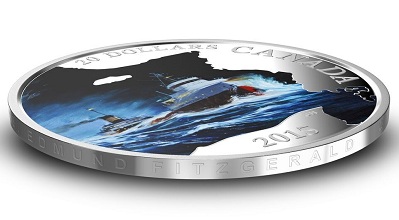 The coin, which is designed by artist John Horton, includes a rich selective color application and depicts the marine conditions on that fateful evening in 1975, as S.S. Edmund Fitzgerald struggles in its quest to beat the fearsome winter storm. In the ship’s final hour at sea, hurricane-force winds have driven the turbulent waters of Lake Superior into a frenzy, and great waves crash against the Fitzgerald‘s red and white bow. Framing this dramatic scene is the engraved outline of the Canadian shoreline of southeastern Lake Superior. The words S.S. EDMUND FITZGERALD and the outline of the ship’s anchor are engraved along the edge of the coin.

The obverse includes the effigy of HM Queen Elizabeth II as designed by artist Susanna Blunt, used on all Canadian circulation and most commemorative coinage since 2003.

The subject of the third coin in this imaginative series, the saga of the S.S. Edmund Fitzgerald was also immortalized in a famous ballad sung by Gordon Lightfoot, released in 1976. The legendary story of a freighter’s quest to withstand an extreme storm still resonates today.

For more information on this and other coins offered by the Royal  Canadian Mint, please visit their Web site. Information is offered in both English and French, with international orders dispatched where applicable.