On Dec. 17, 2011, I used a rural Iowa post office to send a six-coin submission to PCGS, including an 1891-CC Morgan Dollar won in an online auction. As I have a set registry with the company, I had hoped this coin would grade in a high mint state to enhance my collection, stored in a local bank box.

I also have a coin booth at a rural antiques mall. As it was a Saturday, and I was headed to there, I decided to mail my submission from the town’s small post office.

While I realize that I should send submissions registered mail, I often just insure the parcel with delivery confirmation. This is where postal insurance gets tricky.

Before you send, you have to establish a value for your coins. 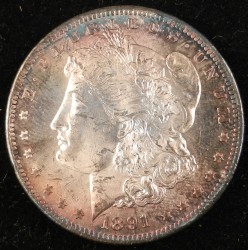 I may believe the Carson City coin in question is MS64, valued at $1200. But PCGS may well grade it lower, meaning several hundred dollars less. How much should I insure it for: (a) what the coin cost in the auction, (b) what I think it is worth or (c) a low-end estimate of a possible PCGS grade?

I insured it for what I paid for it, discounting the fact that I bid on many coins below grey sheet and any I win, and I don’t win all that often, usually represents a good investment.

A week later I checked the PCGS site and the coins still had not arrived. I assumed it was a holiday issue, with the typical Christmas postal rush. However, after the holiday, I checked my delivery confirmation number, which showed the envelope leaving the rural town on the 17th and being sent from Des Moines to California on Dec. 18.

That was it. No more tracking after 10 days.

Moreover, another PCGS submission, mailed Dec. 23, had arrived at the Newport Beach facility. Apparently, the Dec. 17 submission was lost.

I logged on to USPS.com and went to Customer Service, where you can email postal authorities about any number of mail delivery issues. I did about this one, filing a complaint.

The next day I was contacted by the Ames, Iowa, postmaster assigned to help me locate the submission. He believed the lost package might have been damaged in transit and sent to the “dead letter” office, otherwise known as one of three Mail Recovery Centers.

The MRC form was easy to fill out. I provided evidence of my coins with digital pictures. Which reminds me: You should photograph your coins any time you submit them to a grading service, which sometimes I neglect to do. But not in this case because I purchased the coins online (more on that later) and was able to download photos from the Proxibid coin auction site.

If you’re using a Windows Explorer browser, you might have difficulty as I did opening this link. Then it occurred to me that USPS.com wasn’t at fault, but Microsoft (or my browser settings) might be. Not wanting to research that, I just used Firefox, and the link opened right up.

The insurance form was more difficult to complete than the MRC form. One of the questions involved whether the claimant purchased the item in an online auction. My problem was I purchased coins at five different auctions. So I left that answer blank and then addressed it in my claim for each coin lost in the parcel. Once again, because I won the coins in online auctions, I could navigate to those sites and use the “print screen” function on my computer to make jpeg copies of winning bids with photos.

Then I filed the claim.

I also checked with the postmaster of the rural facility where I initially mailed the coins. He did not believe they were lost but were in transit somewhere in the wrong mailbag.

I called PCGS and its Customer Service representative also advised me that she didn’t believe it was lost but just misplaced in a USPS portal.

At that point, I decided to look at tracking information on my successful Dec. 23rd submission, which went from Ames to Des Moines to Bell Gardens, Calif., to the PCGS office in Newport Beach in a matter of days during the holiday season.

Then it occurred to me that other submissions to PCGS from Des Moines usually go through the postal facility in Ahaheim, Calif., where I had had a similar lost and found issue in 2010, although not beyond 10 days, as was this one. I messaged this to my postmasters, and the next day, Dec. 30, I received email tracking information that my Dec. 17th submission was sent from Anaheim to Newport Beach with anticipated delivery in a few hours.

I telephoned PCGS and its Customer Service representative commiserated with my situation and asked company Security to help locate the item. The submission was added to my PCGS account within hours.

Before canceling my USPS insurance claim, I telephoned PCGS again to ask if the package had been damaged in transit and was assured, if that was the case, the company would not have accepted the parcel.

What did I learn from this experience?

First, if you use delivery confirmation rather than registered mail (slower, but tracked at each location, with cheaper insurance rates), do insure your submissions for the entire highest anticipated worth of the contents within. It’s just not worth saving a few dollars in fees if your cherry-picked coins are lost in the mail.

Second, make sure you have photographs of your coins in addition to online auction documentation. Without an indication of what you paid for an item, plus the suggested retail value (easily obtainable from a number of online sites, such as Coin Values) you might not be reimbursed for the full amount of your purchase.

Third, be patient. I state this honestly: The US Post Office has never once lost a piece of my mail, including decades worth of mortgage payments and years worth of grading submissions.

That said, some post offices in the United States are more reliable on occasion than others. So save all your delivery confirmation numbers to the various grading companies and keep tabs on what facilities process your mail efficiently. In the end, I believe, that’s how my lost parcel was eventually found and sent on its way to the destination.