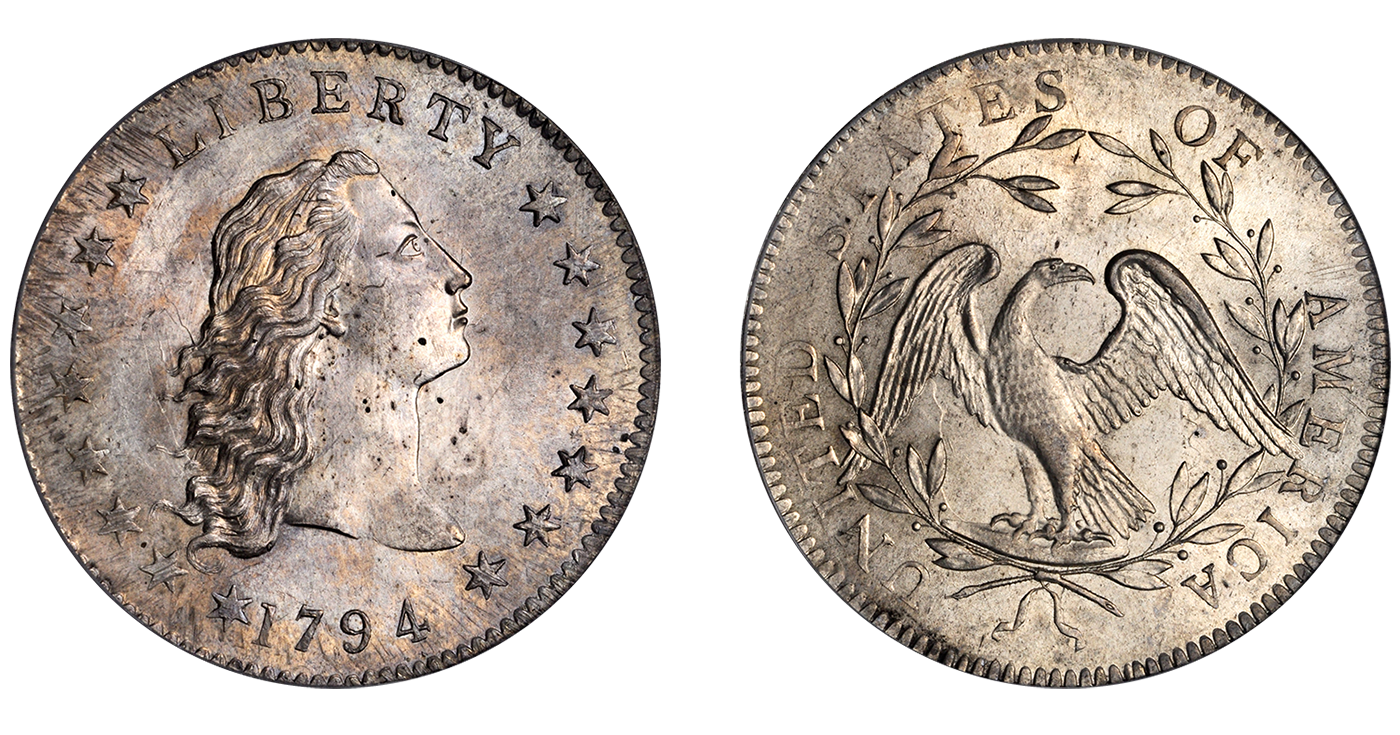 (Santa Ana, Calif.)—Stack’s Bowers Galleries will be featuring the Lord St. Oswald–Norweb 1794 Flowing Hair silver dollar as part of their August 2017 ANA World’s Fair of Money Auction in Denver, Colorado. This PCGS MS-64 example was last offered at public auction in the firm’s sale of the Norweb Collection nearly 30 years ago, in November 1988.

These two 1794 silver dollars remained together for the first 170 years of their existence, until they were offered as part of the Lord St. Oswald cabinet by Christie’s in 1964. The pair had been obtained by an English gentleman-farmer named William Strickland as he toured the young United States from September 20, 1794, to July 29, 1795. During his visit, Strickland journeyed throughout New England and the Mid-Atlantic, even meeting with Thomas Jefferson at Monticello and with then-president George Washington at Mount Vernon. The two 1794 silver dollars were among a diverse group of 84 federal and pre-federal coins gathered during his 10 months in America.

The near-Gem Lord St. Oswald-Norweb specimen is among the finest survivors of America’s first silver dollar coinage and is one of the great treasures of U.S. numismatics. The auction firm describes the surfaces as “impeccably preserved and lustrous, with just gentle traces of planchet adjustment at the obverse border. The coin exhibits strong peripheral definition for the issue, with considerable pronouncement to the left obverse stars and corresponding legend on the reverse.” Ranked as the fourth finest in the condition census and third finest among Mint State examples seen by PCGS, it is a significant, world-class rarity.


Stack’s Bowers Galleries has sold every known Mint State example at least once over the past three decades. The PCGS Specimen-66 Carter-Cardinal-Morelan 1794 silver dollar, sold by the firm in January 2013, set the record for the highest auction price realized for any coin at over $10 million.

Stack’s Bowers Galleries is pleased to once again have the opportunity to present the Lord St. Oswald-Norweb specimen in their auction of the ANA World’s Fair of Money this August in Denver, Colorado. Visit www.StacksBowers.com or call 1-800-458-4646 for more details.

Lord St. Oswald was a 48-year-old member of the House of Lords named Rowland Denys Guy Winn, who had won a Military Cross during his service in Korea. The coins sold with his name had descended through his family for generations, housed in a beautiful 18th-century coin cabinet made by Thomas Chippendale himself for the family estate, known as Nostell Priory, in Yorkshire. The collection had been assembled beginning in the 18th century and added to in the 19th, though it had been left static ever since. Nostell Priory contained a bounty of antiques, including fine art, antiquities, and more, much of which was acquired by England’s National Trust, along with the house itself, in 1953.

Though the name “Lord St. Oswald” is now inseparable from the coins of Nostell Priory, the man who actually collected these coins was named William Strickland. David Tripp has uncovered and reanimated Strickland’s extraordinary visit to the United States, which lasted from September 20, 1794, until July 29, 1795. Strickland was a collector of many things, including coins, and he appears to have gathered a sensible and organized grouping of American coins during his 10-month visit. The coins from the Lord St. Oswald / Strickland collection span the breadth of the Philadelphia Mint’s production until the time of Strickland’s departure from Philadelphia at the end of July 1795, ranging from half cents to dollars, from a lightly worn Chain cent to perfect gem coins struck in the weeks before his return home. Further, the coins struck after that date, including 1795-dated gold coins, Draped Bust issues, and more, are not present here, suggesting that his American collection was formed entirely during his visit and never augmented later. He rubbed elbows with John Adams in Massachusetts, raised glasses with George Washington, and talked farming with Thomas Jefferson at Monticello. Each of those men being collectors, perhaps coins and medals came up in conversation as well. When George Washington hosted another foreign visitor in June 1798, the Polish poet and warrior Julian Ursyn Niemcewicz, he recalled that during his visit to Mount Vernon, “Mrs. Washington showed me a small collection of medals struck during the Revolution” including “one of at least 100 ducats in gold, with the head closely resembling that of G[enera]l. Washington.” Strickland’s interests were so diverse, he undoubtedly found much to discuss with each of the Founders he encountered.

“A Family Affair,” by David E. Tripp, is a lengthy and fascinating study of William Strickland. It, too, can be viewed on the Stack’s Bowers website.   ❑

This post incorporates a press release from Stack’s Bowers Galleries.