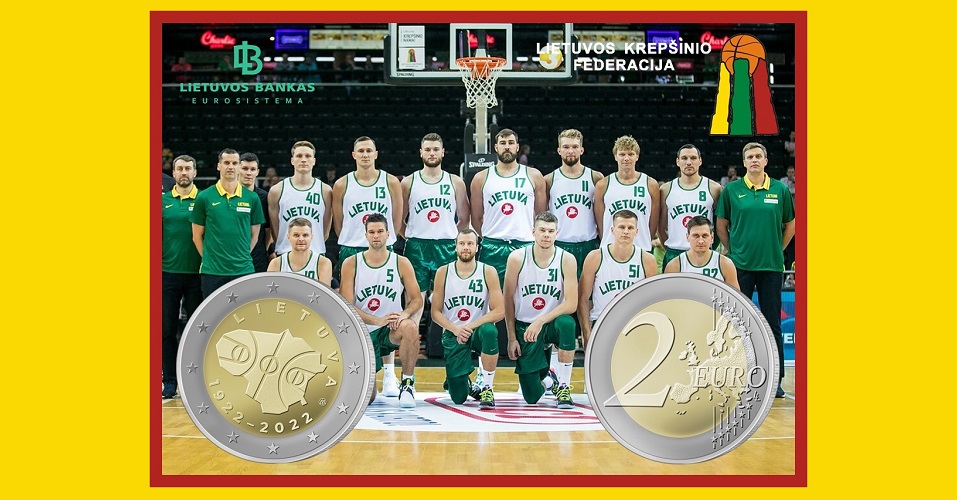 The Bank of Lithuania has released commemorative €2 coins which mark the centenary anniversary of the introduction of basketball to the country’s sporting curriculum. Since then, Lithuania has made basketball their sport as it has become more than just a leisure activity. It is part of national identity and culture, one of the things and an activity that unites many. So important has the sport become in Lithuania that it is believed there is hardly any area in the country that does not have a real or an improvised basketball court.

The first official basketball match in Lithuania was played 100 years ago in Kaunas, on the 23rd April 1922. Since this time, Lithuanian basketball and the players have left a significant mark on the world during the lifetime of this sport, in some countries they have played a decisive role in laying the foundations for the success of those countries on the basketball court.

Just before the outbreak of the Second World War, Lithuania’s men’s team became European champions twice in 1937 and 1939, the women’s team were second on the continent in 1938, and basketball for Lithuanian World War II refugees in the displaced person camps was a way to preserve their homeland. Of particular note, Valdas Adamkus, who became the second president of the Republic of Lithuania after the restoration of independence, was one of those young men who played in the camps and flourished in this basketball sporting environment. Today, as Lithuania’s independence was restored in 1991, a national mission to establish Lithuania’s name in the world of basketball took on full speed. In 1992, during the Barcelona Olympiad, ​​Lithuania’s first Olympic Games after the fall of the Iron Curtain, another Lithuanian men’s basketball team received a lot of international attention by winning one of the two Olympic awards of that year. Lithuania won two more Olympic medals in basketball and in 2003, the Lithuanian men’s team became the strongest on the continent, with the women’s team recording this achievement in 1997. The country’s clubs have repeatedly proved the uniqueness of Lithuanian basketball in international tournaments.

The bi-metallic coins are produced by the Mint of Lithuania at their facilities in Vilnius on behalf of the Bank of Lithuania. Designed by Egidijus Rapolis, the main element of his design on the obverse side highlights the contour of the map of Lithuania arranged as a basketball court. The text above the primary design reads LIETUVA and the commemorative years 1922 – 2022 are shown below. The design is framed by 12 stars representing the European Union. The reverse design is that of a standard €2 coin, found throughout all countries of the eurozone. The face value of €2 appears in front of a map of Europe. The edge of the coins is reeded and includes the incused lettering LAISVĖ*VIENYBĖ*GEROVĖ (“FREEDOM*UNITY*WELL-BEING”).

A total of 750,000 commemorative €2 coins will be released into circulation of which 7,500 pieces struck to Brilliant Uncirculated quality will be specially packaged in a coin-card format. The coin is available directly from the Bank of Lithuania’s online retail shop. For more information, please click here.