The Lietuvos bankas has become a member (1st January) of the Eurosystem as the euro entered circulation in Lithuania today, bringing the number of European Union (EU) Member States using the single European currency to 19, the European Central Bank (ECB) announced. 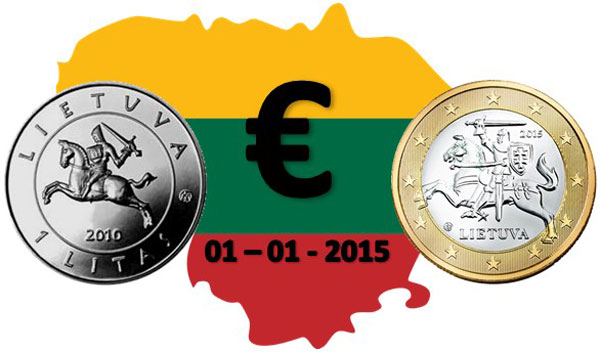 Lietuvos bankas, the national central bank of Lithuania, becomes a member of the Eurosystem, the central banking system of the euro area, which comprises the ECB and 19 national central banks. Lithuania also joins the Single Supervisory Mechanism, which brings bigger banks under ECB supervision. Three Lithuanian commercial banks (SEB bankas, Swedbank and DNB bankas) fall under the direct supervision of the ECB. They have already undergone the comprehensive assessment, a financial check of 130 banks in the euro area.

Mario Draghi, President of the ECB commented, “”On behalf of the Governing Council of the European Central Bank, I welcome this further enlargement of the euro area. Lithuania has taken exceptional measures in difficult times to reach its goal of joining the single currency.”

Lithuania’s Prime Minister Algirdas Butkevicius, who became the first person in the country to withdraw a 10 euro banknote from a cash machine or ATM, commented, “The euro would become a guarantor of both economic and political security.”

As part of its obligatory requirement to the Eurosystem, Lietuvos bankas has paid the remainder of its contribution to the capital of the ECB and transferred its contribution to the ECB’s foreign reserve assets. Lithuania’s accession to the euro area as its 19th member also means that the new system of rotating voting rights in the ECB Governing Council comes into force as of today. Bank of Lithuania has announced it will exchange litas into euros indefinitely at its cash branches in Vilnius and Kaunas.

Currency will be exchanged at the official exchange rate and free of charge. For more information on the EURO change-over of Lithuania, please visit their website at: http://www.lb.lt/euro Information offered in Lithuanian and English.