At noon today, the Mint will release the 2017 Lions Clubs International Century of Service commemorative silver coins. Lions Clubs International, which was founded in 1917, seeks to meet the needs of local communities around the world. With 1.35 million members across 207 countries and geographic areas, it is the world’s largest service-club organization. Under its guiding principle, “We Serve,” the organization empowers its volunteers to serve their communities, meet humanitarian needs, encourage peace, and promote international understanding. Services include community, environmental, youth, and health programs, and disaster relief work.

The reverse, designed by AIP designer Patricia Lucas-Morris and sculpted by sculptor-engraver Don Everhart, depicts a male and female lion with a lion cub, superimposed together over a globe. Its inscriptions are UNITED STATES OF AMERICA, $1, E PLURIBUS UNUM, and CELEBRATING 100 YEARS OF SERVICE. 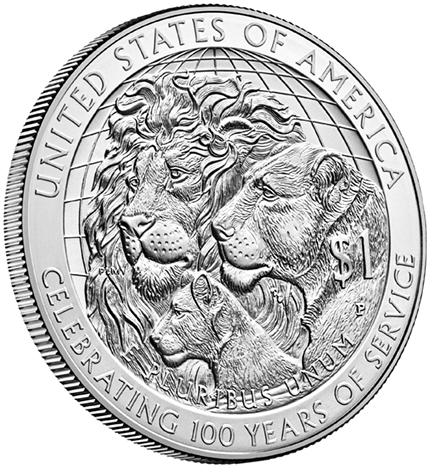 The depth and detail of the reverse design are especially appealing when the coin is viewed from an angle.

With its noon release, the coin will complete a nearly six-year journey that began in 2011. H.R. 2139, the Lions Clubs International Century of Service Commemorative Coin Act, was introduced that year on June 3 by Rep. Peter Roskam of Illinois, where the organization has its headquarters. The bill was signed into law by President Obama on October 5, 2012. Under this law, a surcharge of $10 is added to the price of each coin. These surcharges will be distributed to the Secretary of the Lions Clubs International Foundation for the purposes of furthering its programs for the blind and visually impaired in the United States and abroad; investing in adaptive technologies for the disabled; and investing in youth and those affected by a major disaster.   ❑