Just thirty hours after going on sale, the Lincoln Coin and Chronicles Set has sold out at the United States Mint. The prompt sell out did not come as a surprise to most collectors, as this was one of the most anticipated products of the year.

The Lincoln Coin and Chronicles Set contained five different coins. This included the four different 2009 Lincoln Cents and the 2009 Lincoln Commemorative Silver Dollar, all struck in high quality proof. The 2009 Lincoln Cents have reverse designs which represent the different stages in Lincoln’s life: Birthplace and Childhood, Formative Years, Professional Life, and Presidency. The Silver Dollar was struck to commemorate Lincoln’s bicentennial and features a portrait of Lincoln on the obverse and the closing words of the Gettysburg Address on the reverse. 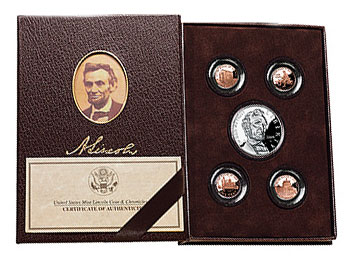 In addition to the coins, each set also included a reproduction of a photograph of Lincoln, the Gettysburg Address in his handwriting, and a certificate of authenticity signed by the US Mint Director. All coins and material came packaged in a tri-fold leather like case with slip cover. The production of the sets was limited to 50,000 with each set priced at $55.95.

Waiting List Notice: The number of orders we have taken meets the maximum limit for the United States Mint Lincoln Coin and Chronicles Set. You may still place an order for this product, which will go on a waiting list. If a product becomes available due to an order cancellation, we will fulfill orders from the waiting list on a first-in, first-served basis.

As of Monday, October 19, 2009, the waiting list notice is still posted on the US Mint’s website. Prices for teh sets on the secondary market are already trading significantly higher than the US Mint’s issue price. Recent completed auctions show prices paid of $150 per set or higher.