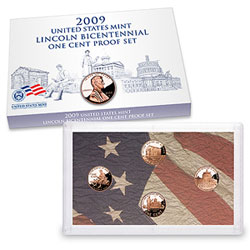 The 2009 Lincoln Proof Set originally went on sale August 26, 2009. The four cents contained in the set were previously released within the larger 18-coin annual proof set, but demand for the 2009 Lincoln Cents prompted the creation of a separate set. The sets were priced at $7.95 with a household ordering limit of five.

Based on the latest US Mint weekly sales report, a total of 201,107 sets have been sold.

The 2009 Lincoln Cent was issued with four different reverse designs to celebrate the Bicentennial of Abraham Lincoln’s birth. The designs represented the four stages of his life in four different states. This included his birthplace and childhood in Kentucky; formative years in Indiana; professional life in Illinois; and Presidency in Washington, DC.

Next year, a fifth and final reverse design will be issued to symbolize President Lincoln’s preservation of the United States as a single and united country. The 2010 Lincoln Cent will depict the union shield with thirteen vertical stripes bound by a single horizontal bar. This symbolizes the the original thirteen states joined together in support of the federal government.