The United States Mint has begun accepting orders for a limited edition set containing the 2012 Star Spangled Banner Silver Dollar. This commemorative coin is issued to mark the bicentennial of the writing of the national anthem of the United States of America. 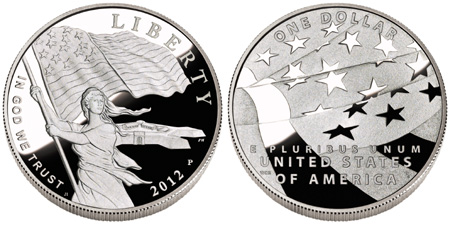 The obverse design of the silver dollar by Joel Iskowitz depicts Liberty waving the 15-star, 15-stripe flag with Fort McHenry in the background. The reverse by William C. Burgard III depicts a waving modern American flag. These coins initially went on sale individually or within a two coin proof set in March.

The latest offering of the 2012 Star Spangled Banner Bicenntennial Silver Dollar Set contains the proof version of the coin along with a reproduction of one of Francis Scott Key’s original manuscripts for the poem, the lyrics to the Star Spangled Banner, information about our national anthem, and colorful illustrations of the battle at Fort McHenry. 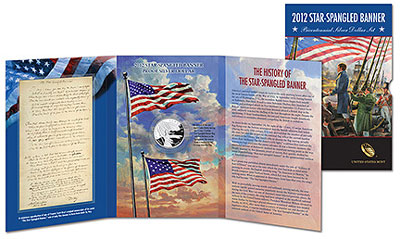 A maximum product limit of 50,000 units has been established for the offering. The cost of each set is $53.95 plus applicable shipping and handling. An initial ordering limit of 100 units per household will be imposed for at least the first week of sales. After that point, the limit will be re-evaluated and may be extended, raised, or lifted.

Orders for the new set may be placed online at http://catalog.usmint.gov/