A large consignment of Libyan banknotes with a face value of one billion U.S. dollars and seized off the coast of Malta in September 2019 remain in a stalemate between U.S. and Russian authorities. The U.S. State Department reiterated on Friday the 29th May that they commend the seizure by Maltese authorities of $1.1 billion of “counterfeit Libyan currency” en-route to the North African country. However, a spokesman for Russia’s foreign ministry said on Saturday the 30th May in response to U.S. claims that the banknotes, headed for the Libyan Central Bank headquartered in Benghazi, are not counterfeit. The consignment of banknotes in denominations of 50 dinars (U.S. $70.50) and 20 dinars (U.S. $28.20) was seized and confiscated, and the U.S. State Department also cites them as contributing to supporting the Libyan National Army, who control roughly half of the country.

After the Libyan revolution which saw the violent ouster of strongman Muammar Gaddafi in 2011, the U.S. government and many European countries have supported the UN-recognised Government of National Accord (GNA) situated in Tripoli, which they have regarded as the country’s legitimate successor. An alternative faction within Libya headed by Field Marshal Khalifa Haftar has retained control of half of the country with its seat of government situated in Benghazi. It is this government or authority which the Russian Foreign Ministry admits these notes were headed for. On the 28th April of this year, in a televised speech broadcast to the country, Military Commander Khalifa Haftar declared himself the “ruler of Libya” with a “popular mandate” from the people. Haftar stated that the 2015 deal, which resulted in the UN-recognised Government of National Accord (GNA) — the unity administration based in Tripoli that was formed after years of civil conflict, and recognised by most of the Western powers was in his words “null and void.” 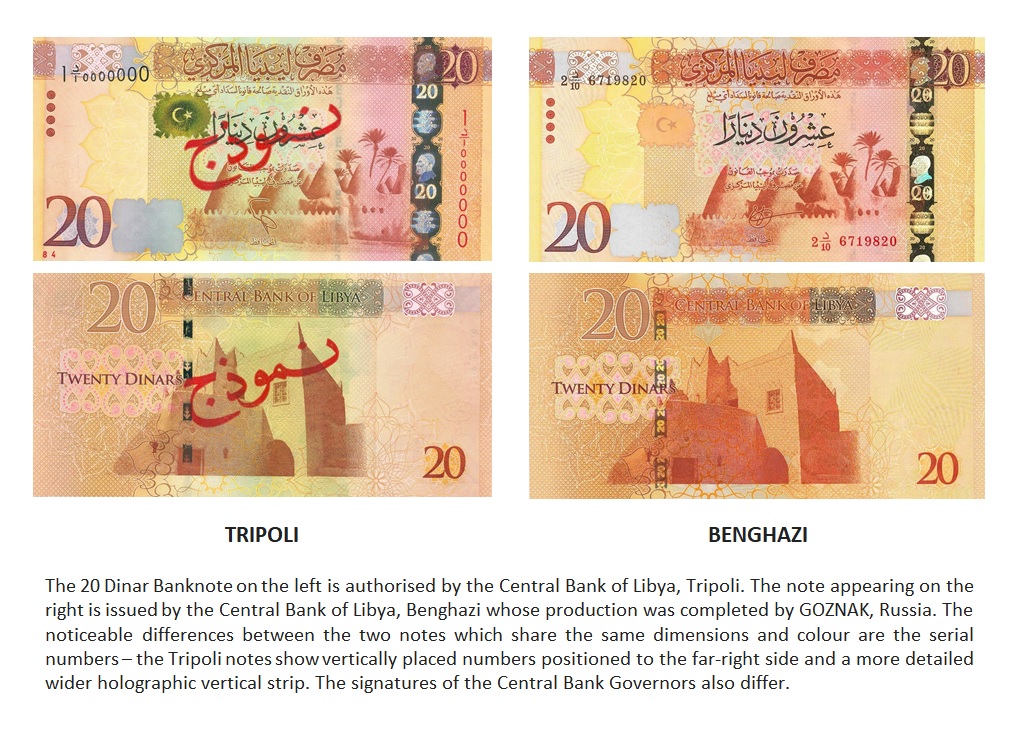 The parallel currency banknotes first began to circulate from 2016 when the cash-strapped Benghazi location of the Central Bank of Libya ordered the production of these banknotes from the Russian-based security printers GOZNAK. The Benghazi location issued 20 and 50-dinar banknotes bearing the same designs as those banknotes issued by the Central Bank of Libya in Tripoli. The notes seized by Maltese authorities are security-printed with the same designs, colours, and dimensions as the Tripoli-issued notes except there are differences with some security features, the notes include the signature of Ali al-Habri, the Benghazi Bank’s governor and serial number are positioned vertically. A contract signed by the Benghazi faction government and GOZNAK in Russia in 2015 stipulated the banknotes should be delivered to an address at the port of Tobruk, in Eastern Libya. 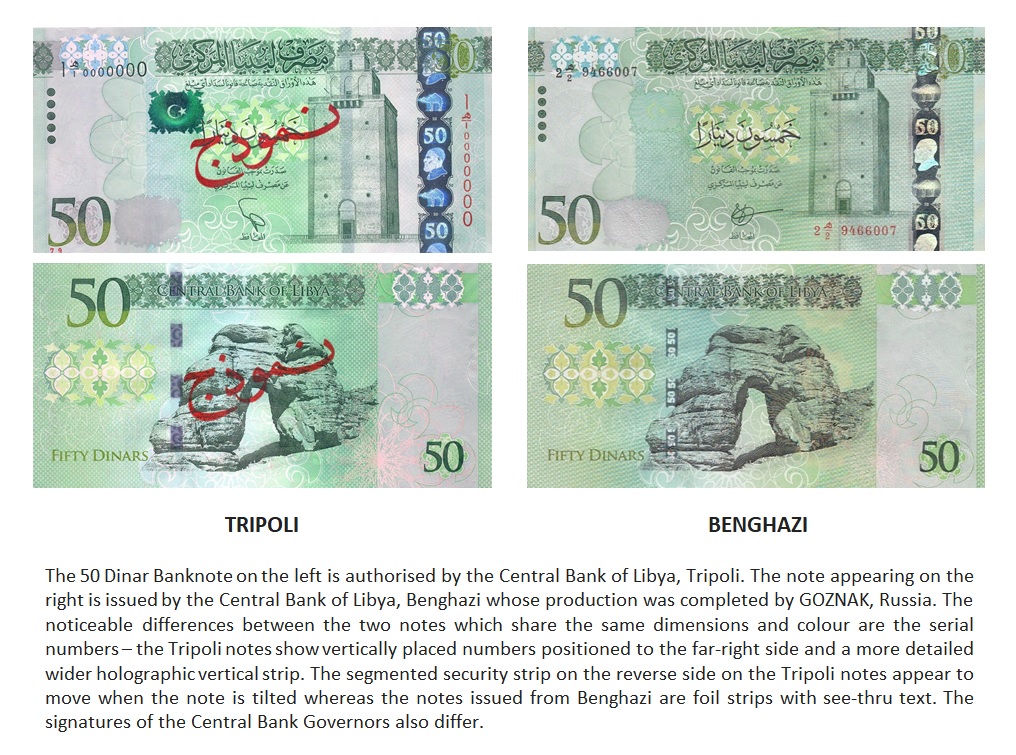 The American policy in terms of the Libyan Central Bank is that the Tripoli location is the only legitimate institution in the country to issue currency and have stated the parallel currency issued by the alternative office in Benghazi is exacerbating the financial challenges faced by reconstruction and an economic downturn due to civil unrest and dropping oil prices. Libyan banknotes issued by the Tripoli location are printed in the United Kingdom in denominations of 1, 5, 10, 20, and 50-dinars. Washington has asked the head of the Government of National Accord and Central Bank in Tripoli to officially declare the alternative currency printed in Russia and issued from Benghazi to be illegal.

The Russian policy on Libya is essentially the opposite the U.S., as Moscow stated Libya has two central banks, one in the capital Tripoli and another in the eastern Libyan city of Benghazi, as two de-facto centres of power govern the country. As such, Russian authorities declare the banknotes are not counterfeit and are demanding the cargo of banknotes be returned or allowed to proceed to their destination. Since 2016, the alternative currency banknotes, which were announced by the Benghazi Central Bank, have been circulating since their initial introduction. An estimated 4.5 billion Libyan dinars equal to more than three billion U.S. dollars have been delivered to the Benghazi offices in four separate shipments from Russia between February and June 2019.

For additional information about the coins and banknotes issued by the Central Bank of Libya — Tripoli, please visit their website.