By the middle of the 1920’s there were more commemorative coins issued in the United States on a regular basis than ever before. In 1925, for example, a total of four different half dollars were issued, including the Lexington-Concord Sesquicentennial Half Dollar. The event commemorated hardly needs an introduction, as the battle of Lexington-Concord is often seen as an early defining moment in American history and is usually considered to have been the first military action of the American Revolutionary War, initiated by the British but an important early victory for the revolutionaries. At the 150th anniversary, it was thus deemed appropriate to have a special commemorative coin issued in honor of the famous battle, which took place on April 19, 1775 more than a year before the declaration of American independence.

The design of the commemorative half dollar shows the famous statue Minute Man, which had been erected in Concord, Massachusetts at the 100th anniversary of the battle by then President Ulysses S. Grant. The location of this statue, North Bridge, played an extremely important part of the battle. The Minuteman of Massachusetts Bay fought the British army in the early morning hours of April 19, 1775 and paved the path that would lead to decisive victory for the colonists. North Bridge would become famous because of the “Concord Hymn” by Ralph Waldo Emerson, in which the first shot that started the battle was described as the “shot heard ‘round the world”.

The Minute Man statue was designed by Daniel Chester French, who was born in Exeter, New Hampshire in 1850, but moved to Concord, Massachusetts in 1867. At the age of 23 he was commissioned to sculpt the Minute Man statue to be placed at the site of the battle during the centennial commemorations. It would not be the first object to be placed at the location of the North Bridge (which would later be rebuilt at the same site and of which the replica is now a famous tourist attraction). In 1836 a large granite obelisk had been erected at the site, which would later become known as the “Concord Battle Monument”. This obelisk had been placed on the side of the British during the battle, a fact which seems to have infuriated some prominent citizens of the area, who thought that such placement was deemed inappropriate.

The statue itself, partly funded by the inheritance of $1,000 left to the city by a prominent citizen back in 1870, is a larger than life romanticized version how French had imagined a minuteman to look during the battle. The soldier that would be the inspiration for French was Isaac Davis, 30 years old at the time of the battle, who was killed in the early morning hours of April 19, the first American soldier to be killed during the revolutionary war. While no lifetime portraits of Davis existed, French allegedly used contemporary descriptions, including those of his widow (who lived until the mid 19th century) as well as descendants of Davis in order to come up with a representative image. 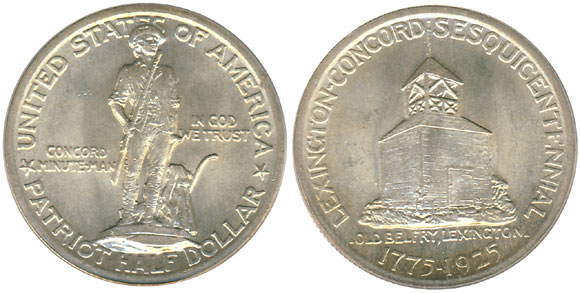 The design of the commemorative half dollar was by Chester Beach, with assistance by James Earle Fraser, who was not fully satisfied with the result and commented that the design was a poor choice. This design had on the obverse the aforementioned statue, along with UNITED STATES OF AMERICA, IN GOD WE TRUST in the right obverse field, CONCORD MINUTE MAN in the left obverse field, and along the bottom the denomination as PATRIOT HALF DOLLAR.

The reverse showed the old belfry in Lexington, which was erected in 1762, moved in 1768 and later rebuilt on the original site in 1910 after the original had been battered by the elements for over a century and a half and was destroyed (some sources say by a storm, others by fire) in the early 20th century. It was its bell that warned the minuteman that the British were coming on the April morning and without doubt is of very important historical significance. The bell weighed a massive 463 pounds and was donated to Lexington in 1761. Besides an image of the belfry and the words OLD BELFRY, LEXINGTON the reverse also featured the words LEXINGTON-CONCORD SESQUICENTENNIAL and the dual dates 1775-1925.

Congress had originally authorized a total of 300,000 pieces to be struck at the Philadelphia Mint, but the final mintage was 162,000 pieces struck for sale plus 99 assay pieces, most of which were later melted. The coins were sold in both Lexington and Concord for $1 a piece during the sesquicentennial festivities, which lasted several days from April 18 to April 20, 1925. Sales were brisk and the entire mintage that had been struck and later sent to Massachusetts was sold. Although some pieces did end up in circulation, most were carefully kept which results in the present availability in various mint state grades, usually in the MS-62 to MS-64 range. Certified gems are somewhat scarce and always in demand, while anything nicer than that becomes rare. Without a doubt the Lexington-Concord commemorative half dollar has always been an important issue because of its historical significance and remains popular with collectors to this day.