Back in 2004, the United States Mint offered two special products containing the Lewis and Clark Bicentennial Silver Dollar. The first was a coinage and currency set, which achieved a sell out of the entire limited production of 50,000 sets within one week. The second was a coin and pouch set, offered later in the year, which also achieved a full sell out of 50,000 sets. 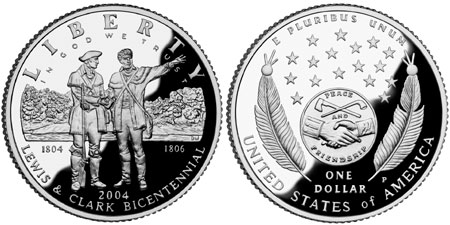 The 2004 Lewis and Clark Commemorative Coin Program was authorized under Public Law 106-126, which called for up to 500,000 silver dollars to be minted and issued in commemoration of the famous expedition. The obverse of the coin, designed by Donna Weaver, depicts Meriwether Lewis and William Clark standing by a stream planning another day of exploration. The reverse, also designed by Weaver, features two feathers to represent American Indian cultures, seventeen stars to represent the number of states in the union at the time, and a rendition of the Peace Medal presented to Native American Nations during the expedition.

Sales for the individual proof and uncirculated silver dollars began on May 12, 2004. On the same date, the Coin and Currency Sets also went on sale and achieved their rapid sell out. The Lewis and Clark Coin and Pouch Set would not go on sale until September 7, 2004, due to the time required to hand craft the pouches which would be included in the sets.

When the Coin and Pouch Sets eventually went on sale, US Mint Director Henrietta Holsman Fore called them the “most anticipated product of 2004.”

Dr. Robert R. Archibald, President of the National Council of the Lewis and Clark Bicentennial said, “Americans who purchase these coin and pouch sets will become stewards of a unique, handcrafted work of art commemorating tribal traditions and honoring ancestral contributions to the expedition.”

Each set contained the proof version of the 2004 Lewis and Clark Silver Dollar and a handcrafted Native American pouch. With no two exactly alike, the pouches were cut, tanned, and decorated by artisans from 11 Native American tribal nations. A portion of the proceeds from these sets went to support Native American language revitalization programs.

The coin and pouch were packaged together within a display box, although the US Mint recommended separating the silver dollar and pouch for long term storage. A small note included in the box stated in part, “We do not know how the traditional tanning methods used in producing these pouches might affect the finish of your coin in a closed environment over a long period of time.”

Also included in the set were separate certificates of authenticity for the silver dollar and the pouch. The latter included a handwritten statement indicating the name of the artisan who created the pouch, the date, and the tribal nation.

The Lewis and Clark Coin and Pouch Set was priced at $120.00, and had a maximum product limit of 50,000 units. The US Mint imposed a limit of 10 sets per order and 50 sets per household to ensure the widest possible distribution. By the end of the year, the entire 50,000 sets were sold.

The story of this US Mint product of the past does not end with the sell out. Almost three years later on October 31, 2007, the US Mint offered a refund of $130 for anyone who had received a set containing a pouch produced by the Shawnee Nation United Remnant Band of Ohio. A partial refund of $90 was offered for customers who wished to return the pouch and keep the coin.

A press release stated, “The United States Mint has learned that neither state nor Federal authorities recognize the Shawnee Nation United Remnant Band of Ohio as an official Indian tribe.  Therefore, the pouch is not an authentic American Indian arts and crafts product.”

The Shawnee Nation, URB had been selected to produce the pouches by the Circle of Tribal Advisors, however they dropped their membership in the COTA in late 2005. The Indian Arts and Crafts Board informed the United States Mint that the Shawnee Nation, URB does not meet the legal requirements to produce and market authentic Native American products, which appears to have prompted the Mint’s refund offer.