As part of a commemorative coin program to celebrate the millennium of the discovery of the New World by Leif Ericson, the United States Mint released a special two coin set which included an American silver dollar and an Icelandic 1000 Kronur silver coin. Released in the year 2000, the United States Mint described this as the first jointly issued domestic and international silver commemorative coin release. 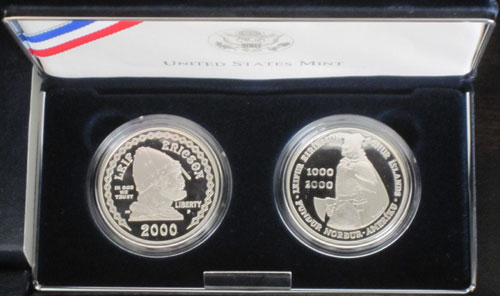 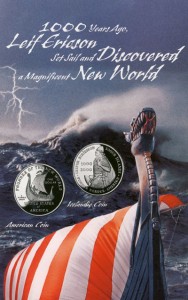 As an interesting side note, the Icelandic 1000 Kronur coin continues to represent the last time that a coin was struck by the United States Mint for a foreign country. The US Mint retains the authority from Congress to mint coins for a foreign country, provided that this does not interfere with regular minting operations. Since the minting of the 1000 Kronur coin in 2000, the US Mint has not pursued or undertaken any other opportunities in this regard.

Sales of the 2000 Leif Ericson Millennium Commemorative Two Coin Set began for mail orders on June 21, 2000 and for online orders starting on June 26. Orders placed before August 4, were priced at $63 per set, with orders placed after this date priced at $68 per set. Each set consisted of the proof versions of the American and Icelandic coins packaged together within a satin-lined presentation case with a certificate of authenticity. Sales were relatively strong, reaching a total of 86,136 units by the completion of the offering period. 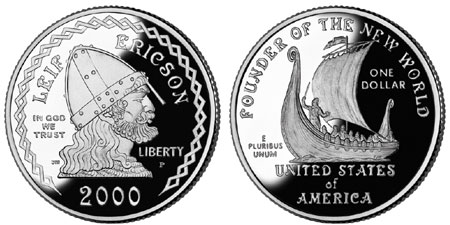 The 2000 Leif Ericson Silver Dollar, which featured a portrait of the famous Nordic explorer on the obverse designed and sculpted by John Mercanti. The portrait was rendered in traditional Icelandic style. Inscriptions include “Leif Ericson”, “In God We Trust”, “Liberty”, and the date “2000”. The reverse design by James Ferrell featured a depiction of a Viking ship under full sail with Leif Ericson at the helm heading towards the New World. Inscriptions include “Founder of the New World”, “One Dollar”, “E Pluribus Unum”, and “United States of America”.

The American coin would later receive a Coin of the Year Award for the category of “Most Historically Significant.” The obverse design would also be included in the Citizens Coinage Advisory Committee’s visual definition of design excellence created in 2010. 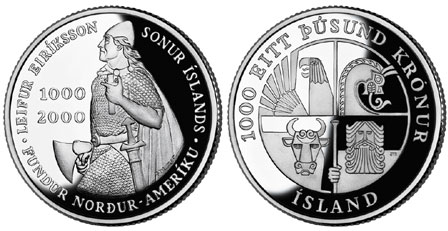 The 2000 Leif Ericson 1000 Kronur Silver Coin featured an artist’s interpretation of the statue of Leifur Eriksson made by Stirling Calder and presented to the Icelandic nation in 1930 by the United States Congress for the occasion of the 1000 year anniversary of the Icelandic Parliment. The reverse contained the Icelandic Coat of Arms representing the four guardians of Iceland, an eagle, a dragon, a giant, and a bull, which guard the north, east, south, and west of Iceland. The designer of the Icelandic coin was Thröstur Magnússon.

The reverse design of this coin was included in the CCAC’s visual definition of design excellence.