(2/14/18 Lincroft, New Jersey) — On Valentine’s Day, Legend Rare Coin Auctions proudly announced the consignment of the P.F.M. Collection of Morgan Dollars, the current #6 PCGS Registry Set in the Morgan Dollars Basic Set, Circulation Strikes (1878-1921) to Regency Auction 26, the official auction for the PCGS Members Only Show in New Orleans. Not only is it complete by date and mint mark, but the collector also included major varieties that are popularly collected with the regular issues and are there to augment the depth of the collection. For good measure, the collector also made sure to have a fair number of PL and DMPL designated coins to add to the visual allure. 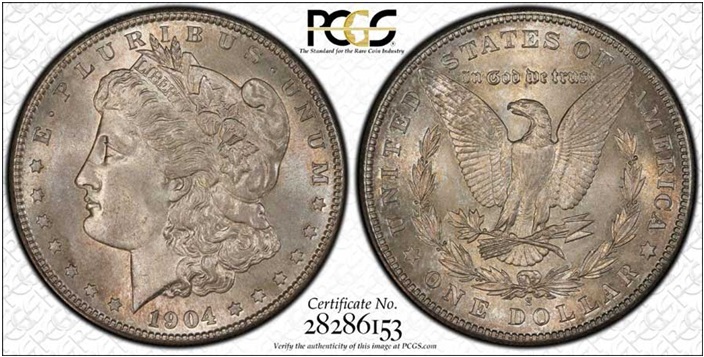 “This is a very impressive set,” declared Laura Sperber, the founder of Legend Rare Coin Auctions, upon the collection’s arrival in the LRCA offices. “The collector has been carefully assembling the set since 2001, and once you see the coins in hand, you know this was a real labor of love for him. The list of highlights is really impressive — a Gem MS-65 1892-S, the Coronet Collection 1904-S in MS-67 — just wait until you see the whole thing, there really are many amazing coins!”

“After our record-shattering sales of the Sunnywood/Simpson and Coronet Collections, the owner of the P.F.M. Collection knew that there was only one auction firm that could produce a catalog that would show, in print, the love he had for the coins, and present them in that light to today’s collectors,” said Julie Abrams, president of Legend Auctions, who worked directly with the collector. “Some of the coins are tied for finest, or second finest graded, the 1889-O in MS-66+ is the sole finest for the date, and there are many dates where only a handful are graded finer.”

“Each coin is well matched for eye appeal,” noted Senior Numismatist Greg Cohen, “and there are many familiar pedigrees seen, including Jack Lee, Coronet, PCGS Tour, Cajun, and Shrike.”

Highlights of this collection, include, but are certainly not limited to:


With the P.F.M. Morgan Dollar and the Crow River Peace Dollar Collections consigned to the 26th Regency Auction, Legend Rare Coin Auctions will be presenting a special session on Wednesday, May 16, that is being dubbed “Dollar Day.” Every silver dollar consigned to the auction will be featured in this special session which will also include consignments of very cool toned Morgan dollars that have already been received from multiple consignors — including duplicates from a world-class collection.

Consignments to this sale are still being accepted, but space is filling fast. Contact Julie Abrams (845-430-4378 or ) or Greg Cohen (732-935-1168 or ) today to discuss placing your coins into the New Orleans Regency Auction. Representatives will be attending the February Long Beach Expo (February 21-24), table 601, the ANA National Money Show (March 7-10), table 410, and the March Baltimore Whitman Expo (March 22-24), table 643. Whether a single rarity, a handful of duplicates, or an entire collection, Legend Rare Coin Auctions’ dedicated staff will work with you from the first phone call until you receive your settlement check.