On March 5, 2012, an event will be held at the Fort McHenry National Monument and Historic Shrine Visitor Center to launch the sales of the 2012 Star Spangled Banner Commemorative Coins. 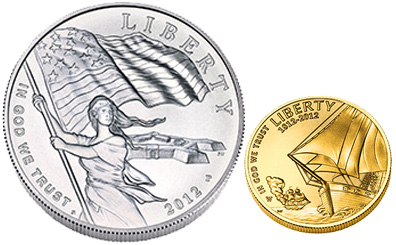 Authorized under Public Law 111-232, up to 100,000 $5 gold coins and up to 500,000 silver dollars will be issued to commemorate the 200th anniversary of the writing of the Star-Spangled Banner. This is one of two commemorative coin programs authorized for 2012.

Update: The remarks at 11:00 AM are open only to the press and invited guests. Coin sales beginning at 11:30 AM will be open to the public.

During an introductory period, the silver dollars will be priced at $49.95 for the proof version and $44.95 for the uncirculated version. The uncirculated and proof gold coins and a two coin set will be available and priced based on the average weekly market price of gold. Prices reflect surcharges of $10 per silver coin and $35 per gold coin that will be paid to the Maryland War of 1812 Bicentennial Commission in support of the Bicentennial events, outreach, and preservation of War of 1812-related sites.

Those who purchase a coin at the launch event will receive a Certificate of Authenticity from the United States Mint and a special acknowledgement from the Maryland War of 1812 Bicentennial Commission.

The Star Spangled Banner Commemorative Coins will also be available for sale on the US Mint’s website http://catalog.usmint.gov on March 5, 2012 at 12:00 Noon ET.