On Monday the 1st September, the Central Bank of Ireland hosted an enjoyable and memorable launch ceremony for their latest silver crown coin honoring John Philip Holland, who was born in Liscannor, Co. Clare, Ireland in 1841 is the man credited as the inventor of the modern submarine. Holland’s design was the first to combine an electric motor for submerged travel and an internal combustion engine for use on the surface. The coin marks the first release of a new series entitled “Irish Science and Inventions”. 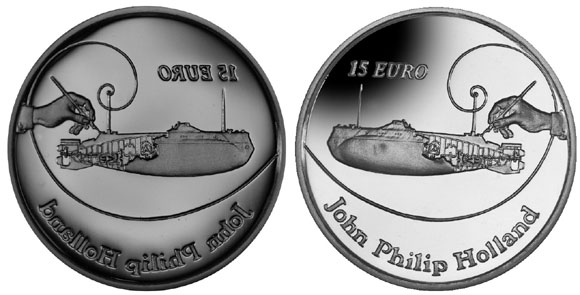 Image of the original die and the proof quality coin produced, courtesy of the Pobjoy Mint.

The launch was appropriately hosted by Ireland’s prestigious Marine Institute, located in Oranmore, County Galway on the west coast of Ireland and among some of the country’s most extraordinary historical landmarks not to mention its extraordinary coastline and natural scenery. 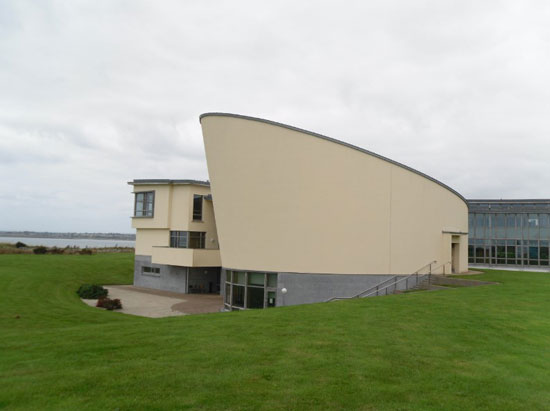 The Marine Institute’s distinctive and award-winning auditorium which faces the Bay of Galway. The Institute’s main hall was the setting for the launch of the Central Bank’s latest coin.

The Marine Institute is Ireland’s national agency for marine research, technology, development and innovation. Some of their attention focuses on the economic potential of the country’s surrounding 220 million acre marine resource while promoting sustainable development of the Marine Institute through funding programs and essential scientific services. It is housed in an award-winning and distinctive building which consists of its Generic laboratory, the crescent annex and the auditorium. The impressive complex faces Galway Bay itself with breathtaking views out to the Atlantic Ocean. 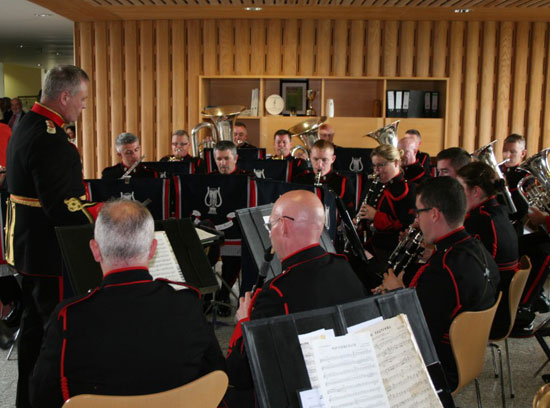 The Irish Army Band, First brigades, Collins Barracks, Cork were on hand to lend a more nautical feel to the presentation & launch with several selections of traditional trues before and after the launch.

The festivities on the day began with a selection of naval tunes performed by the The Irish Army Band, First brigades, Collins Barracks, Cork who played familiar tunes to the gathered crowd of invited guests and dignitaries which included representatives from the American Legion and British embassies. If you haven’t heard of John Philip Holland previously, you would certainly be at an advantage to learn about him at the Marine Institute as his name and accomplishments are duly noted. 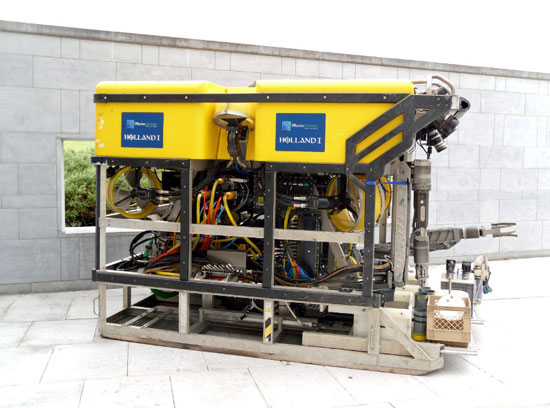 The “Holland I” remotely operated vehicle named in honor of the inventor of the modern submarine was put on display especially for the launch of the John Philip Holland collector coin issued by the Central Bank of Ireland.

On display especially for the launch was the ROV or, remotely operated vehicle “Holland I” named after the inventor of the modern submarine. The Holland I is utilized to explore the little-studied habitats at the edge of the continental shelf, and can be operated in depths from approximately 400 meters to over 3 kilometers. The ROV Holland 1 also uses its robotic arm to retrieve samples and move objects under water whilst being viewed from the on-board cameras. 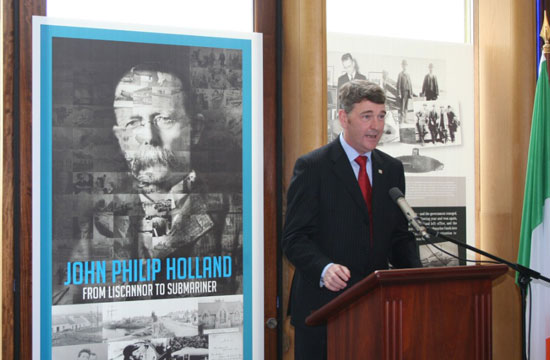 CEO Dr. Peter Heffernan opens the launch by speaking of the contributions made by John Philip Holland and the how invention of the modern submarine changed naval tactics internationally.

Monday’s launch was opened by the Marine Institutes CEO Dr. Peter Heffernan who welcomed invited guests and dignitaries and offered some insight to John Holland and his accomplishments. He then introduced the Central Bank’s Director of Currency and Facilities Management, Mr. Paul Molumby. 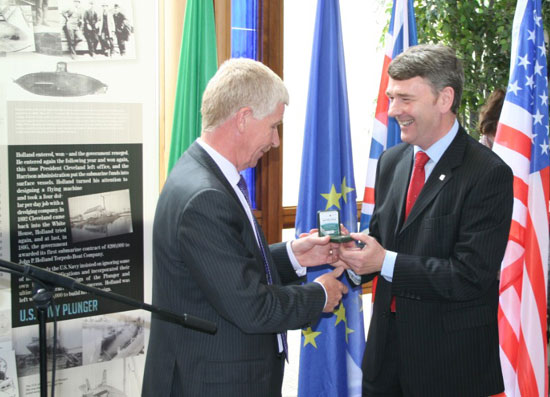 Mr. Molumby, as part of the launch was pleased to present the coin’s first strike to CEO Dr. Peter Heffernan who accepted the coin on behalf of the Marine Institute. Dr. Heffernan commented the coin would be on permanent display for visitors to view. 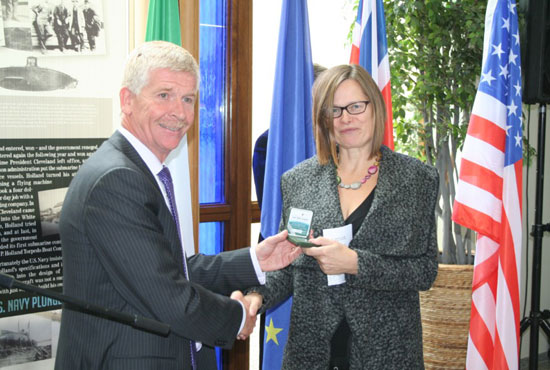 Mr. Molumby presents the second strike of the new series to its designer Mary Gregoriy during the launch.

The second strike was presented to the designer of the coin, Ms. Mary Gregoriy who enthusiastically explained her approach to the design was the research she had carried out resulting in a depiction which includes Holland’s hand extending into the picture and his pen making the final stroke of the design. Mr. Molumby presents the third strike in the series to Mr. Tony Duggan, researcher/consultant of John Philip Holland and senior member of the organizing committee for today’s presentation.

The coin’s third strike was presented to Mr. Tony Duggan, researcher and consultant on the history of the Hollland submarine who chaired the organizing committee for the day’s event. The fourth strike coin was presented to the Irish Army Band, First brigades itself who had serenaded the guests throughout the launch from start to finish – and their conductor stepped in to receive the silver coin. Also in attendance was the Mayor of the City of Galway, Mr. Donal Lyons as well as the mayor of the County of Galway, Ms. Mary Hoade. 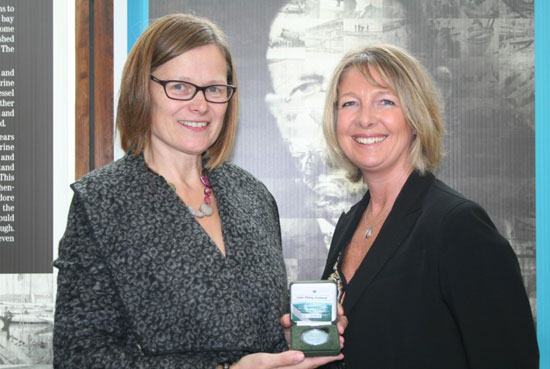 Mary Gregoriy, designer of the first coin in the “Irish Science and Inventions” series and Taya Pobjoy, CEO of the Pobjoy Mint at the official launch of the coin. The Pobjoy Mint produced 10,000 examples of the new coin in proof quality on behalf of the Central Bank of Ireland.

On hand representing the Pobjoy Mint, was its CEO Taya Pobjoy, whose Mint produced the 10,000 pieces in the first issue of the new series, Ms. Pobjoy discussed the production of the coin with guests and caught up with both the manager of the Collector coins department of the Central Bank, Margaret Daly and the new coin’s designer, Mary Gregoriy.

Ireland has an impressive scientific and technological tradition and many major discoveries and developments have originated from the work of Irish scholars. Over the next few years the Central Bank of Ireland, on behalf of the Department of Finance, will issue a limited edition collector coin honoring the life and work of an Irish scientist and inventor. 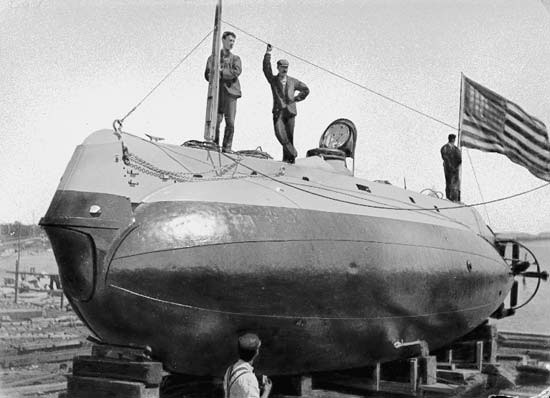 The choice for the first coin was John Philip Holland who first worked as a teacher in various locations in Ireland but in 1873 he emigrated to the United States. With the backing of the Fenian Brotherhood, (an Irish republican organization founded in the USA) Holland built the Fenian Ram submarine. Holland continued to develop the submarine concepts and on the 11th April 1900, the Holland VI was purchased by the United States government for the sum of $150,000 and subsequently commissioned as the USS Holland (later designated SS1). This was the first modern submarine in the United States Navy and became the prototype for the submarines of the US Fleet, as well as those of Japan, Great Britain and the Netherlands. With this successful concept developed by John Holland, the era of the modern submarine had begun.

The coin is now available from the collector coin department of the Central Bank and directly from their Headquarters on Dame Street in Dublin. For more information on this coin and the series, please visit the website of the Central Bank of Ireland at: http://www.centralbank.ie/paycurr/collector/Pages/Coinsets.aspx

For additional information on the Marine Institute and the many studies and projects carried out by their faculty, please visit their website at: www.marine.ie

I would like to thank the management & staff of the Marine Institute for their kind hospitality on the day, it was greatly appreciated.