The Latvijas Bankas have issued (15th June) a new silver coin to highlight Riga’s past association with the Hanseatic League. This is the eighth coin in the set and also the last one in the series.

The origins of the Hanseatic League date back to the 13th century when the German commercial towns of Hamburg and Lübeck concluded an agreement on trading in the Baltic Sea and the North Sea. The League gradually evolved into a flourishing union in the 14th century and into the first half of the 15th century, uniting dozens of towns in the Baltic and underlying regions. Latvia’s capital city, Riga was one of those important cities and a member of the Hanseatic League from 1282 until its final disintegration. 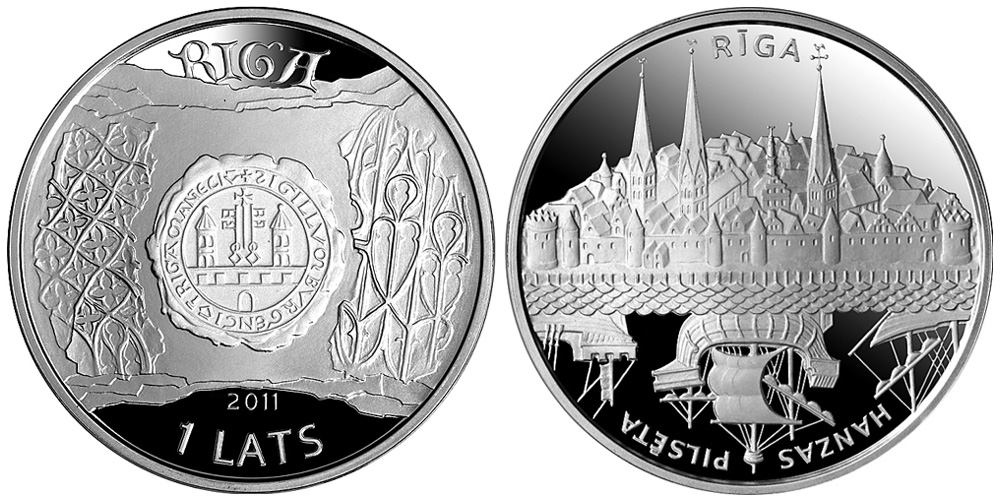 The coin’s design is the work of Latvian artist Gunārs Krollis and is struck at the Mint of Finland.  The obverse design depicts the 13th century seal which includes Riga’s old coat of arms and is positioned in the centre. There are inclusions of Gothic-style ornamental patterns on either side of it. The inscription “RIGA” is seen at the top and the year “2011” is seen just above the inscription of “1 LATS” is positioned beneath the seal in the lower half of the coin.

The reverse of the coin is divided into two parts by a body of water. The upper part features a panoramic view of the Hanseatic City of Riga. There is the inscription RĪGA above it. The lower part features the reflections of old-style Hanseatic-era ships, with the inscription “HANZAS PILSĒTA” (Hanseatic city) seen below. The old town walled city’s skyline as it might have appeared during the height of the League’s influence, is featured above the water line.

The coin is struck as a proof sterling silver crown and weighs 31.7 grams with a diameter of 38.6 mm.  For more information on this and many more collector’s coins offered directly from the Bank of Latvia, please visit their website at: http://www.bank.lv/en/money/collectors-coins