The Bank of Latvia have issued (16th September) a new silver coin which celebrates the 800th anniversary of the first coinage struck in Latvian territory.

Initiated by Albert (Albrecht von Buxhövden) Bishop of Livonia, later Riga (from 1199 – 1229), he granted traders from Gotland the right to mint coins in his territory on the provision that the coins must be of the same quality and weight as those found in Gotland of the day. Curiously, there was little evidence, and no exact time was documented for granting the charter and thus, for a significant period of time, the coins minted in the Bishopric of Riga remained unidentified. Just prior to building the Riga hydroelectric power station, substantial archaeological excavations took place in several locations, including Mārtiņsala in the middle of the River Daugava, and this is where a hearth with twenty identical coins of previously unknown origin was uncovered in 1968. 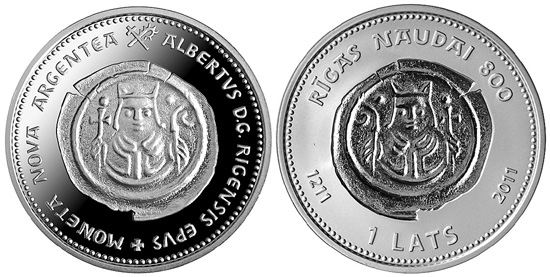 The obverse of the collector coin, struck by the Mint of Finland and designed by graphic artist Inta Sarkane, features an image of the original pfennig. Surrounding the image is the legend, which includes the symbol of the Archbishopric of Riga, a cross and bishop’s crosier in a crossed position, and the inscription ALBERTVS D G RIGENSIS EPVS MONETA NOVA ARGENTEA (Albert, by the grace of God, Bishop of Riga – New silver money).

The reverse depicts one of the pfennigs of Bishop Albert’s time centred on a plain surface, displaying a front view of the bishop wearing a mitre, holding a cross in his right hand and a crosier in his left. The central image is surrounded by the inscription RĪGAS NAUDAI 800 (Riga Money 800) at the top, and years 1211 and 2011 as well as the inscription 1 LATS at the bottom.

The incused lettering on the coin’s rim reads: LATVIJAS REPUBLIKA (Republic of Latvia) and LATVIJAS BANKA (Bank of Latvia) separated by dots.

The coin has a face value of 1 lats and is struck in sterling silver (.925) with a weight of 12.5 grams and a diameter of 28 mm. A total of 5,000 pieces proof quality pieces has been authorised.

For more information on this and other coins available from the Bank of Latvia, please visit their website at: http://www.bank.lv/en/money/silver-coins