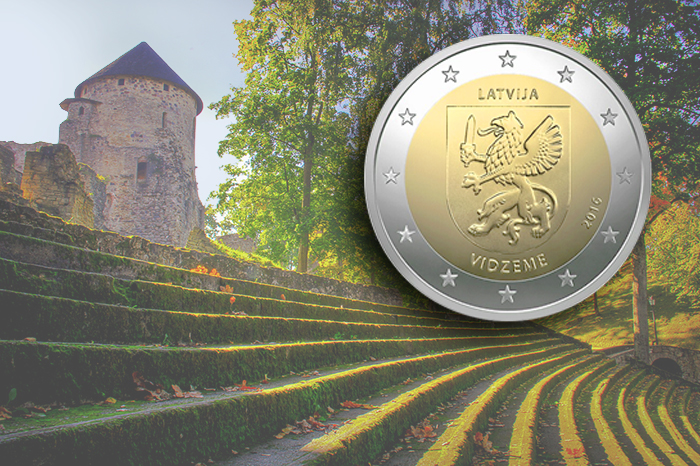 In the background, historic Cēsis Castle, located in the Vidzeme region. (Flickr photo by Graham)

On November 15, the Bank of Latvia issued their latest €2 commemorative coin. The issue launches the upcoming centennial of Latvia’s independence, which will be officially celebrated and observed in November 2018. Although Latvian independent statehood was interrupted in 1944, when the Baltic Republic was forcibly incorporated into the USSR, and not reversed until 1991, Latvians will celebrate their centennial anniversary in two years.

The years 2018 through 2020 will be very important ones in Europe, as many countries will be celebrating their official centenary anniversaries of statehood or independence following the Great War—or as it was later called, World War I—after which many new countries, including Latvia, emerged from the fighting and concluding peace treaties.

As the celebrations come closer, Latvia has embarked on a series of coins that will highlight their four historical regions, which are constitutionally recognized as distinct from one another but make up one nation. The first coin in this series focuses on the region of Vidzeme. Meaning “Middle Land,” Vidzeme is also known as Livland, although it comprises only a small part of traditional Livland. Present Vidzeme includes the Latvian portion of an area previously known as Swedish Livonia and the present City of Riga. Historically, Vidzeme formed in the territory inhabited by peoples known as Latgallians and Livs until the 13th century. The borderline stretched along the rivers Daugava, Aiviekste, and Pededze. In the 18th century, the movement of Protestant Lutheran or brethren congregations played an important role in the development of the area, while the 19th century saw the arising of many remarkable rural craft centers and the building of sailing vessels on the coast of the Gulf of Riga. During the period of the New Latvians movement, activity of Latvian cultural personalities increased in Vidzeme. Numerous cultural and artistic specialists have come from this region; inhabitants of Vidzeme speak the Middle dialect of Latvian, the Latgallian and Selonian accents of the High Latvian dialect, and the Vidzeme accent of the Livonian dialect.

Today, Vidzeme is the most populated region of Latvia, accounting for more than half of the country’s nearly 2-million-strong population. The longest river of Latvia, the Gauja River; the highest peak, known as Gaiziņš; and the largest cave, known as Gūtmaņala, are all located in Vidzeme. 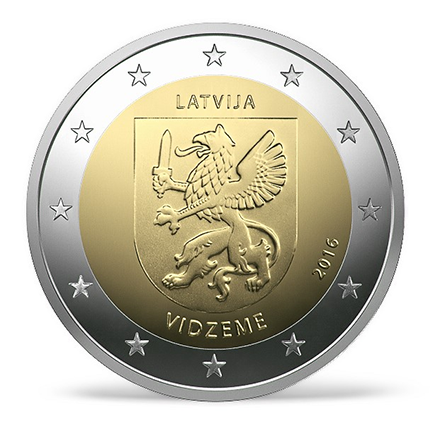 The coin is produced by the Lithuanian Mint on behalf of the Bank of Latvia. The design of the national side of the commemorative was created by artist Laimonis Šēnbergs, and modeled for production by Jānis Strupulis. Šēnbergs has designed 19 collector coins previously for the Bank of Latvia, while Strupulis has created designs for two previous collector coins and produced the plaster models for many collector and circulation coins. The national side features the coat of arms of Vidzeme, which depicts a griffin rampant within a traditional shield, a sword placed in its right claw.

The European side of commemorative or special-design coins, bearing the nominal value of €2, was created by artist Luc Luycx. The finely milled edge features the inscription DIEVS SVĒTĪ LATVIJU (“God Bless Latvia”), with the words separated by stars.

One thousand commemorative coins minted in Brilliant Uncirculated quality and presented in a special souvenir folder will be available. This is the first coin in the four provinces / historical regions series, which will include Vidzeme, Latgale, Kurzeme, and Zemgale. Next year the Bank of Latvia will issue two additional coins, and in 2018 the last coin, which will coincide with the centennial. A number of commemorative and collector coin series, along with several coins dedicated to the foundation of an independent state, will also be announced in due course. Latvijas Banka will conclude the nation of Latvia’s centenary celebration by marking the 100th anniversary of the central bank on November 1, 2022.