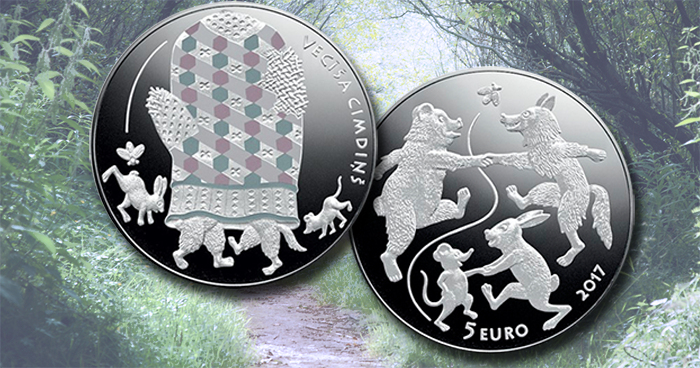 The Bank of Latvia have issued (28th March) the latest silver coin in their popular and ongoing “Latvian Fairy Tales” series, which was introduced two years ago. The coin features the fairy tale entitled “An Old Man’s Mitten.”

It is said and believed—especially by Latvians—that Latvian folklore is a treasure trove of never-ending wisdom, offering words of advice and admonition that remain relevant across the ages.  The lesson imparted by the Latvian folk tale about an old man and his mitten is subtle, yet it continues to warm human hearts and with its message, which it communicates through a story that is both funny and innocent, yet somehow ends on a sad note. But is the ending truly sad? (The fairy tale and its meaning are discussed further below the specifications chart.)

“An Old Man’s Mitten” is artist Arvīds Priedīte’s 14th collector-coin design for the Bank of Latvia. It is struck by the Mint of Lithuania on the bank’s behalf. The obverse shows a patterned, colourful mitten with the legs of a bear and a wolf protruding from the wrist. To the left are the rabbit and the fly of the fairy tale; to the right is the mouse. The Latvian phrase VECĪŠA CIMDINŠ (“old man’s mitten”) reads clockwise from upper right.

The reverse of the coin depicts four of the fairy tale’s protagonists—the bear, wolf, mouse, and rabbit—participating in a joyous dance, as the fifth protagonist, the fly, buzzes among them. The denomination, 5 EURO, is placed at the bottom; the year of issue, 2017, is at lower right.

This is the third collector coin in the Latvian “Fairy Tale Coins” series. The first two coins in this series were “The Five Cats,” issued in 2015, and “The Hedgehog’s Coat,” issued in 2016. The coin is available in Latvia at various points of sale; please see the Bank of Latvia’s PDF for more information. No information for direct international sales is yet available.

Like almost all fairy tales, this one begins with the age-old preface “Once upon a time…” On a cold winter’s day, an old man went out to the forest to cut some firewood. He wanted to light his pipe and was looking for tobacco and a lighter in his pocket when he lost one of his mittens. “Lost is not lost, for someone else finds it,” thought the old man, and sure enough, the lost mitten became a cosy shelter from the cold for the queen of flies, a squeaking little mouse, a white-tailed rabbit, a short-eared wolf, and even a lumbering bear. Nobody was refused shelter, and all the animals rejoice in dancing.

The strong unity of this happy community suddenly came under a threat: the rooster’s morning crow startles the animals, causes panic, and ruins their harmony. All the friends are so frightened that they jump out of the mitten, tearing it to threads. The fly ended up living in the king’s castle, the mouse in someone’s potato cellar, the rabbit in the oat field, the wolf in the bushes, and the bear in the forest. Nothing more is heard from them, but one thing is certain: up to this day, the old man is walking with only one mitten on… which, seemingly, is the end.

The old man’s mitten acts as a symbol of wisdom and understanding, an expression of good sense and involvement. These qualities conjure up a cosy and welcoming atmosphere, and, though squeezed and cramped in the mitten, the bear, the wolf, the rabbit, the mouse, and the fly can dance in perfect unison. They are brought together, by fate, to become a part of the great reality that is called life.

However, due to their lack of unanimous purpose, the rooster can raise panic and commotion among them simply by crowing in the morning! Thus the moral of the story is that, when people are not united in their actions and activities, when their sense of unity gets lost somewhere, and when their daily routine makes them forget about compassion and kindness, the old man’s un-mendable mitten may be all that is left behind.   ❑
Share: