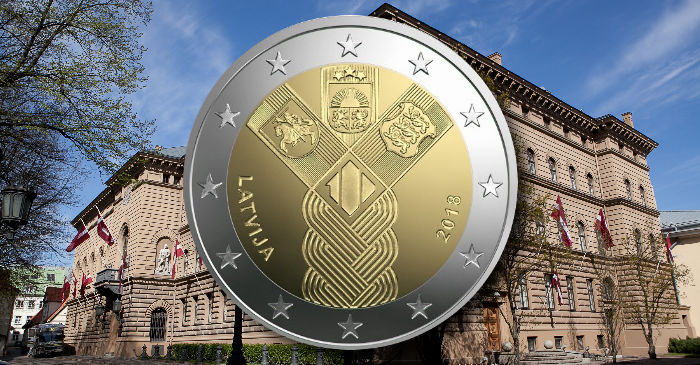 The Bank of Latvia have announced on Wednesday, 31st January 2018 that they are officially issuing two-euro commemorative coins dedicated to the centenary of independence anniversaries of the three Baltic States. This celebratory year heralds the 100th anniversary of the declaration of independence of the Latvian and Estonian states and also the 100th anniversary of the re-establishment of Lithuanian statehood. In honour of these important milestone events, Latvijas Banka, Lietuvos Bankas, and Eesti Pank have jointly issued a two-euro commemorative coin with a common design. The design of the national side of the euro coins was selected in a public online vote to commemorate the Baltic nations’ determination to defend their independence. The coin also endorses the unity of Latvia, Lithuania, and Estonia, their common histories, and their readiness to cooperate to defend their independence and freedom. The design also symbolises the common past, present, and future of the Baltic States and their place, not only in Europe, but internationally as well.

The establishment of the independent Republic of Latvia was proclaimed by the People’s Council of Latvia on the 18 November 1918 in Riga. Thus, supported by global changes, the desire of the Latvian nation to have a sovereign state was turned into reality towards the end of World War I. Lithuania and Estonia, Latvia’s neighbouring countries, also declared their independence that same year, on 16 February and 24 February respectively. Three nations, having experienced rather different histories, stood side by side on the international political stage and demonstrated their common desires by defending their independence both on battlefields and diplomatic struggles to be eventually acknowledged as sovereign nations. The following years brought inspiring successes and painful losses, but eventually led to a new awakening towards the end of the 20th century.

The new two-euro coins were minted by the Mint of Lithuania and the design of the common side of the coin is the work by Lithuanian designer Justas Petrulis, whose poignant motif depicts a symbolic plait in which the fates of the three Baltic sisters intertwine. This design received the most votes in the public survey in which six coin designs were offered for a vote, with two designs each coming from Latvia, Lithuania, and Estonia, respectively. The national side of the commemorative coins issued by the Latvijas Banka features the inscription LATVIJA.

The European, or common, reverse side of these euro commemorative coins bear the nominal value of 2 EURO and were designed by artist Luc Luycx, which is the same as that of other two-euro circulation coins.