The Bank of Latvia have recently issued a silver collector coin marking the 150th anniversary of the opening of the Riga – Daugavpils railway line which was constructed in 1860 and officially opened on the 12th September 1861, making it the first railway line on Latvian territory.

Connecting the primary railway line from St. Petersburg to Warsaw, this line led the way to further expansion of Latvia’s rail network to cities in Ukraine and directly to Moscow. Just before the beginning of the First World War (1914), the total length of Latvia’s railway had increased to 1,941 kilometres (1,206 miles) with most of the additional lines connecting to ports and increasing regional trade. 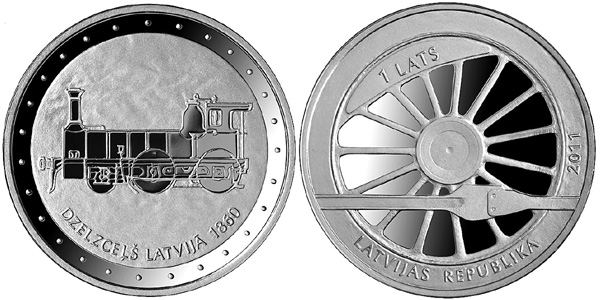 Struck at the Royal Dutch Mint to proof quality, the sterling silver coin has a weight of 22 grams and has a diameter of 35 mm. A total mintage of 5,000 pieces has been authorized.

For more information on this and other coins offered by the Bank of Latvia, please visit their comprehensive website at: http://www.bank.lv/en/money/silver-coins