The Treasury of the Isle of Man Government have launched their latest “Cat” crown from the highly popular crown coin series which depicts some of the world’s most loved breeds of fascinating felines.

In its 27th year, the “Cat” series continues with the Selkirk Rex, a very distinctive cat which stands out for its very curly coat. In fact, this breed is one of the world’s “newest” as it originated in Montana, USA as recently as 1987 and it is known that each Selkirk Rex is descended from just one ancestor possessing the foundation gene which resulted in the curly fur in its coat! It is a large and solidly built breed with a very soft coat which has a woolly look and feel with loose, unstructured curls. The temperament of the Selkirk Rex reflects that of the breeds used in its development. They have a lot of the laid-back, reserved qualities of the British Shorthair, the cuddly nature of the Persian, and the playfulness of the Exotic Shorthair. They are incredibly patient, loving and tolerant cats. These gentle cats bring a smile to your face and warmth to your heart. 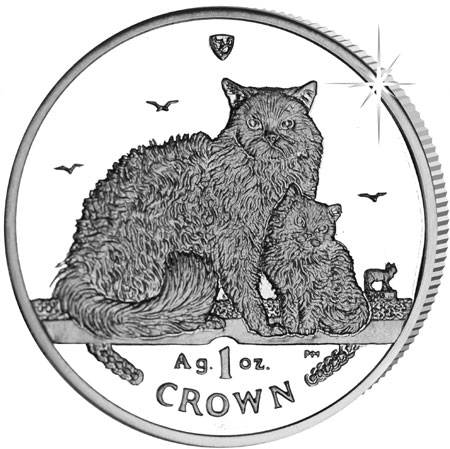 The coins, struck by the Pobjoy Mint, UK on behalf of the Isle of Man treasury, include an image of a Selkirk Rex Longhair cat with its kitten along with a miniature image of the tail-less Manx cat to the right of the Selkirk pair. The obverse of the coin carries an effigy of Her Majesty Queen Elizabeth II, Lord of Mann by Ian Rank-Broadley FRBS along with the year of issue.

The crowns are available in both cupro-nickel in BU quality and sterling silver in proof quality. For more information on these and other coins issued by the Isle of Man treasury, please visit the website of the Pobjoy Mint, UK at: http://www.pobjoy.com/products/commemorative-coins/latest-issues?orderby_sort=title|asc&category:year=14|183 Information offered in English, International orders dispatched.